An ordination of joy, laughter and gratitude

Deacon Andrew Rooney poses for a photograph with Bishop Vincent Long OFM Conv, Bishop of Parramatta, following his ordination to the diaconate at Our Lady, Queen of Peace Parish, Greystanes. Image: Diocese of Parramatta

The day before one of the most joyous days of the liturgical calendar, Gaudete Sunday, seminarian Andrew Rooney had even more reason to celebrate as he was ordained to the diaconate by Bishop Vincent Long OFM Conv, Bishop of Parramatta.

Surrounded by family, friends, his brother seminarians and priests from around the Diocese of Parramatta and beyond, Deacon Andrew began the penultimate stage of his vocational journey towards the priesthood during Mass at Our Lady, Queen of Peace Parish, Greystanes.

Hundreds more tuned in to witness the ordination via the parish’s livestream, sharing their own prayers and well-wishes.

As Bishop Vincent remarked on the joy and gratitude he felt at the occasion, he also acknowledged the challenge that Andrew had overcome in preparing for this milestone.

“Andrew has shown resilience, resourcefulness, dedication and perseverance during the time of disruption and changes,” he said. Deacon Andrew, beaming throughout the ceremony, expressed his thanks and at times disbelief that, after eight years of preparation, the self-confessed “master-Hungry-Jacks-chef-turned-music-school-dropout” was receiving Christ’s sacrament of the diaconate.

As he reflected on how God opened him to receiving “this most wonderful gift of Christ’s sacred order,” he explained his wonder at how his vocation was now becoming a reality.

“It was only after the Rite of Ordination that I was convinced that the journalist and photographer from the Catholic Outlook were not contracted by MTV to spontaneously jump out to inform me that I had indeed been punk’d,” he joked. Deacon Andrew Rooney lies prostrate during the Litany of the Saints during his ordination to the diaconate at Our Lady, Queen of Peace Parish, Greystanes. Image: Diocese of Parramatta

Aside from the jokes, Deacon Andrew sincerely thanked the hundreds of people who have gifted him the sign of God’s love and have impacted his formation through their prayers and support.

He made special mention of his home parish of St Padre Pio in Glenmore Park, as well as the parishes he has served in his pastoral placements: St Oliver Plunkett Parish, Harris Park, St Bernadette’s Parish, Castle Hill, and Our Lady, Queen of Peace.

He also thanked Bishop Vincent for entrusting him with his confidence to serve the Church of Parramatta, before explaining the important role his family has played in his life decisions with their wise council, example and support. Deacon Andrew Rooney poses for a photograph with his parents following his ordination to the diaconate at Our Lady, Queen of Peace Parish, Greystanes. Image: Diocese of Parramatta

In addressing his parents, Deacon Andrew said, “You who fostered within me the greatest gift of all – faith. Who knows where I’d be without you and the sacrifices you made to ensure that I could choose such a wonderful life.”

In closing, Deacon Andrew chose to model his diaconate on an unlikely character – a fictional butler from British TV drama Downton Abbey.

“I offer these words as my prayer and I ask that you might pray for this for me too that I might dedicate my life and work to leading others to our Good Lord.

“’To be a servant, in my view, is a noble calling. The goal of service is to smooth the paths of others.’”

Deacon Andrew will serve the parish communities of Our Lady, Queen of Peace, and St John XXIII Parish Glenwood-Stanhope Gardens for a minimum of six months before being ordained a priest.

The video of the livestreamed ordination can be seen via the Our Lady Queen of Peace Facebook page.

View images from Deacon Andrew’s ordination here or below: 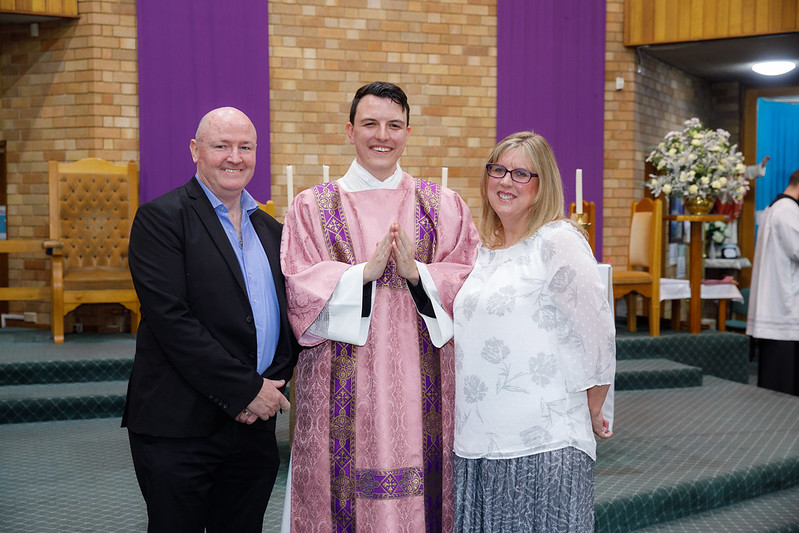