The Apostolic Nuncio to Australia, Archbishop Charles Balvo, has encouraged the permanent diaconate community to live a “spirituality of service”.

Archbishop Balvo, who formally took up his position in April, detailed his experiences and interactions with permanent deacons throughout his own ministry in the United States, the Pacific Islands and in the Czech Republic.

“When I received the invitation to speak to the permanent diaconate, it was something that I readily accepted because of the value I have for them,” Archbishop Balvo said.

“The kind of relationship that I have managed to have with permanent deacons is a very friendly relationship. “My first parish was where I first met permanent deacons – one was formerly a brother and one was married and had a family, and where I first discovered the kind of ministry they carried out.

“When I was appointed Nuncio to New Zealand and the Pacific Islands in 2005, I reached out to one of the deacons from my home parish outside of New York City to be at his ordination, and the other deacon was in the parish that one of my sisters lived who is still in the parish today.

“My most recent appointment was in the Czech Republic, where many of the permanent deacons do chaplaincy work visiting prisons. They are able to go in and have a relationship with the men and speak to them. It’s not an easy ministry, but it’s very important that they did.” Archbishop Balvo said that the Church is called to be “diaconal”, modelling itself on the work that is asked of the deacons.

“In speaking to permanent deacons in Rome, the Pope pointed out that in the early Church, deacons carried out grassroots work on behalf of the entire community, especially on behalf of the least, so that none of those least would be in need.

“In today’s Church, deacons are called to be caring servants who do their best to ensure that no one is excluded and that the Love of the Lord touches people’s lives in a tangible way. “The Pope wants deacons to be humble – to do not seek to put themselves at the centre of attention and that’s good advice for all of us.

“He wants deacons to be good spouses, fathers and grandfathers – this will give hope and consolation to couples going through difficult times and they will find in you a genuine spirit, simplicity and outstretched hands. Accompanying young couples in the first years of their married life is something that can be part and parcel of the live of the permanent deacon and of their families and wives.

“He wants deacons to be sentinels to help the Christian Community to recognise Jesus in the poor and the distant and knows how to see beyond and help others see beyond – whatever the need, you are able to recognise the Lord in so many of his smaller brothers and sisters who ask to be welcomed, fed and loved.

“He also asks one thing – don’t forget to pray for each other. It’s something that all of us together are involved in each in our own different way.”

The Nick Kerr Memorial Conference Dinner is named in memory of Deacon Nick Kerr, the Chair of the National Association of Deacons Executive, who died in July 2021.

The Permanent Diaconate in the Diocese of Parramatta is growing faster than any other Diocese in Australia. There are currently 13 active deacons in the diocese, along with one deacon on extended leave and two retired deacons. In addition, there are 13 men in formation and most of their wives are also active in the formation process.

To learn more about the permanent diaconate in the Diocese of Parramatta, visit https://parracatholic.org/permanent-diaconate/ or contact the Diaconate Vocations team via diaconate@parracatholic.org

View images from the 2022 Biennial National Deacons’ Conference here or below: 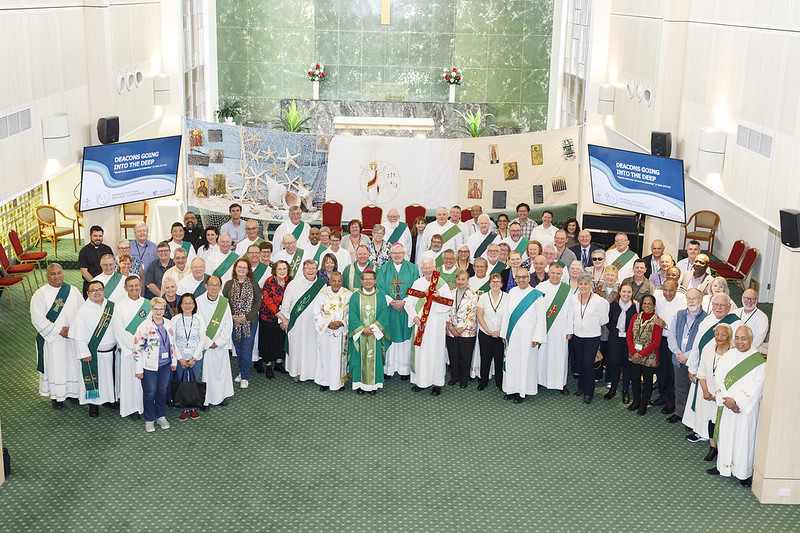