The Syrian and Iraqi refugees fled the persecution of Islamic State (also known as daesh) and now receive support at the Fairfield Centre of STARTTS (NSW Service for the Treatment and Rehabilitation of Torture and Trauma Survivors).

To view images from the meeting between Bishop Vincent and the refugees, click here. 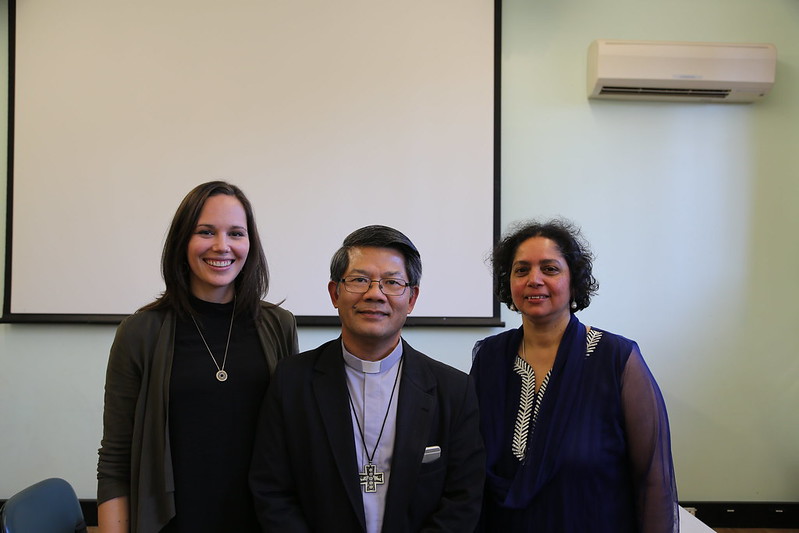 The gathered refugees became engrossed in Bishop Vincent’s life story, which they understood deeply because of their own experiences.

“So we have something in common between you and I and that is we are immigrants or refugees to this country,” Bishop Vincent said.

“I left on a very small boat, no bigger than this table here…only six or seven metres in length… and we had over a hundred people on board, so extremely overcrowded,” he said.

Their boat quickly ran out of food and fuel but a passing ship rescued them.

Bishop Vincent explained the historical background of the Vietnam War. This included the conflict between Communism and the West, and some facts about Catholicism in Vietnam. The Bishop also spoke about Vietnamese refugees as the first group of non-European migration since the White Australia Policy.

“It was a real test for Australia and the Australian people to accept and live with a such a large number of Asian refugees in their midst. But Australia rose to the challenge, as it has always done in its history. I was a boat person…I left Vietnam on a boat and I came to Australia via a refugee camp in Malaysia. Why did I take such a risk, in leaving my country of birth and taking such a big risk by leaving on a boat, crossing the Pacific ocean and coming to Australia?”

The benefits of refugees to Australia

Bishop Vincent told the group they have much to offer Australia.

“Refugees often don’t bring a lot with them to a new country, not in terms of material wealth and possessions. When I came to Australia I didn’t have a hand bag, I didn’t have any possessions. But what I had and what you have is a determination; a determination and a resilience to build a new and a better future in Australia, your adopted homeland.”

“That’s the best asset that a person can bring…this resourcefulness, this resilience, and this determination to reconstruct a new life.”

In the Q&A post talk, several people wanted to know about religious freedom in Vietnam, which the Bishop explained is severely limited by the Communist Government.

A sumptuous afternoon tea followed the questions, with trademark Middle Eastern hospitality. This gave people time to speak to Bishop Vincent on a more personal level.

His then fiancée waited anxiously for his return.

“I was in love…” Raphael said.

“I told her when the war was over, I would go back and marry her, and now I am married to her,” he said.

His wife is also a member of their STARTTS group.

Furthermore, Raphael escaped prison as part of a Vatican facilitated prisoner of war exchange with Iraq.

The Vatican’s Cardinal Etchegaray flew to Baghdad in 1985 to achieve this exchange. Raphael said his treatment in the prison was crueler because they knew he was a Christian.

The therapy is ongoing for this Christian group of survivors at STARTTS.

The group plans to follow up the morning tea with a visit to St Patrick’s Cathedral, Parramatta for Mass with Bishop Vincent.

*Not his real name.