Friends, relatives and people of good will gathered to pray for the soul of Fr Maurice McNamara, or Fr Mac as he was more commonly known, on Wednesday 14 June at Bede Polding College, Windsor. Fr Mac’s love, warmth, enthusiasm, humour and adventure were apparent to all, nourished in the McNamara family’s faith, which shone by the witness of vocations to priesthood and religious life.

Fr Mac’s younger sister, Sr. Therese ‘Terie’ McNamara OLSH, gave the first of five remembrances. She shared the inscription on his Ordination Card from 8 March 1958: “May I be pleasing to God and compassionate to people,” Sr. Therese read. The McNamara Family after Mass in Rose Bay. Image: Supplied.

Fr McNamara was a man of many nicknames, including Mos, Maurie, Blue and Father Mac.

Younger sister Brenda Thomas described the great fun of Fr Mac visiting home during his seminary years and how he taught her to surf.

“I wouldn’t have been brave enough if he hadn’t been there next to me to encourage me…when Mos was in the nursing home, he would often say to me that he would love to come down and catch one last shoot in the surf,” Brenda said.

Christopher Zucker also learned to surf from a young Maurice McNamara and remembered his passion for playing and watching rugby.

“He used to reflect on some of the great sporting events…and on what he regarded as the greatest sporting victory of all time, when he was Captain of St Columba’s and they beat St Patrick’s,” Christopher said.

Peter Harrington recalled times he and Maurie drove around Australia, sleeping under the stars.

“The significant experience we shared was a very memorable safari – we went from Alice to Broome, the Kimberly’s, the Gulf of Carpentaria and eventually to Cairns, camping out each night under the Australian starry skies, which was very enriching for the three of us.”

Niece Madeleine Hassan wrote a poem for her remembrance:

Do not weep for me at my grave,

I am not there.

I am in the word of the Lord,

In the purity of the white frame.

I am in the love of sisters and brothers,

In the laughter and songs of the childhoods of four generations.

I am in a lifetime of great mates, in the bonds of love and friendship.

Do not weep for me.

I am the words weaving the good story,

In lands and people far and near.

I am in the adventures of connection

And in your partnerships of love.

Do not weep for me at my grave,

I am not there,

I am with you.

Gen Bell, Philippa Pattinson, Nell Cleary, Colleen Klime, and Alex Bell placed special items on Fr Mac’s coffin: the McNamara Coat of Arms, bible, stole and a chalice that was passed down three generations of clergy in the family.

Then Stephanie Christopher and Sr Pauline Fogarty delivered the readings.

Most Rev Bede Heather, Emeritus Bishop of Parramatta gave the homily, and described Fr Mac as a brother, pastor and leader.

“He loved…the simplicity of what they sought in life,” Bishop Heather said regarding Fr Mac’s ministry to people in Papua New Guinea.

Bishop Heather wore one of Fr Mac’s stoles from Papua New Guinea. He also spoke fondly of the time they served together in a pastoral team at Holy Family Parish, Mt Druitt.

Sr Helen Law and Judy Rigg read the Prayers of the Faithful.

The pallbearers were David Thomas, Paul Christopher, Jamil Hassan, Johari Hassan, Jeff Flegg and Peter O’Brien.  Concelebrating priests and mourners sang the “Salve Regina” as the coffin was placed in the hearse.

Bede Polding College students were dignified ushers and welcomers to the funeral and participated in a guard of honour as the hearse departed for Richmond Cemetery, where classmate, Fr Mick Kelly, did Fr Mac’s committal. 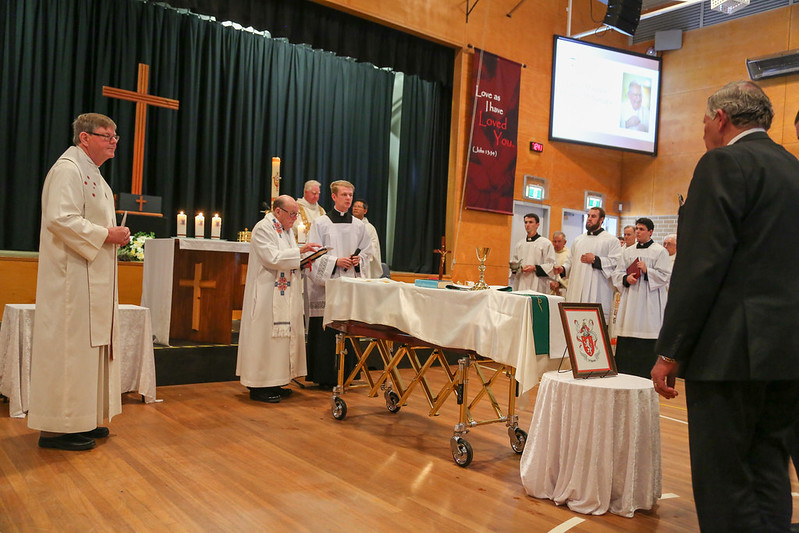