The Permanent Diaconate community of the Diocese of Parramatta have farewelled a “gentleman of service” in Deacon Owen Rogers.

A Mass of Christian Burial for Deacon Owen was celebrated on Friday 12 November at Corpus Christi Parish, Cranebrook, the parish community he had served for over 10 years.

Bishop Vincent Long OFM Conv, Bishop of Parramatta, was the principal celebrant alongside priests and deacons from the Diocese of Parramatta.

Deacon Owen’s extended family including his twin sister, his nine children, grandchildren and great-grandchildren were seen wearing green as they joined friends and parishioners to say farewell to their dad, brother and grandad. “Owen was a community man. His association with this community here at Corpus Christi has been outstanding,” Bishop Vincent said during his opening remarks.

“He endeavoured to build this Body of Christ, this community of the faithful here at Corpus Christi and beyond, not only through liturgical celebrations, of which he was intimately involved as a deacon, but also in his outreach, especially through his services with St Vincent de Paul. “[It is] a day of mourning for the children, grandchildren and great-grandchildren, but also a day that they farewell him with great fondness, love and with great pride.

“We honour him, we farewell him, but we also entrust him to the care and mercy of our loving God.”

During the homily, Deacon Tony Hoban, who was ordained alongside Deacon Owen in December 2009, reassured those who mourn that God is with them during this time, focussing on the shortest verse in the Bible – “Jesus wept”.

“In this Christian sense of death, we first look back, we remember the person who is no longer with us, we grieve their departure, we remember the good times, the shared memories, the significant events in their life. But we don’t stop there, we also look forwards.

“We’re experiencing a deep pain of mourning the loss of Owen’s presence alongside us, but we are joyful that he is with God.

“The same Jesus who wept with those who mourned the loss of Lazarus, weeps with us today as we mourn the loss of Owen. But Jesus also points forward, assuring us that our joyful mourning is not in vain, offering us the hope that our stories, along with Owen’s stories are all part of the greatest story ever told.” Deacon Tony explained that he had gained enormously over their 16 years of friendship, with Deacon Owen continuing to teach him, even in his final days.

“I was able to visit him a couple of times in his last ten days. On the first occasion, he was able to sit up in bed and talk a little bit, amidst his discomfort. After a while, I stood up from where we were sitting, and walked to the bed and commented on the beautiful photos, and he gently motioned to me to come and sit back down.

“He took my hand, and we just sat there, hand in hand, with a deep sense of respect and solidarity. And I reflected afterwards, he was teaching me. I didn’t need to be moving about, he just wanted me to be there with him, to be present to him.

“I know all the theory about just being present with people, I’ve learnt all that stuff, but Owen, in that moment, taught me a practical lesson I will never forget.

“I farewell you, Owen, mate, with a farewell that you always gave – God bless.”

In delivering the eulogy, Martin Rogers, Deacon Owen’s son, detailed the life of his father and of his late mother, Jeanette, who passed away in October 2020.

Martin described his father as a “gentleman of service”, highlighting that his dad’s careers in the Royal Australian Navy, the St Vincent de Paul Society, and as a deacon, were all underpinned by a spirit of service. “There is a saying, people will forget what you did, but people will never forget how you made them feel. Whenever times were difficult, Dad never really needed to say much, he would place his hand on your shoulder, and you knew then, you are not alone, and you knew you would be ok.

“Dad was special. Teaching us how to be a good parent and person, to have patience and grace when dealing with young ones, to be able to accept people for who they are and acknowledge that everyone has a part to play in life.

“A man of integrity, compassion and humble of heart, an inspirational teacher, so educated and wise, with the gentlest of souls.”

Deacon Owen’s children also wrote messages of love to their dad in the funeral booklet, with his daughter Maryann reflecting, “Dad, You have always been a great support and strength throughout my life and were a constant inspiration to many. You have forever left your footprints on my heart.”

It was only fitting that Deacon Owen himself had the last say, with a video clip of him shared at the conclusion of a family slideshow. “I take this opportunity to say to all our family and friends for the joy and happiness you have brought both to Jeanette and myself over the years.

“We have been blessed eternally, to say the least, and we would like to say a huge thank you for being part of our lives and walking life’s journey with us.

“May the Father bless you and your families – Father, Son and Holy Spirit, Amen.”

Deacon Owen was born in 19 June 1941 in Drumcondra, Ireland, and moved to Australia in 1955. He was ordained to the Permanent Diaconate by Bishop Kevin Manning on 5 December 2009.

Deacon Owen actively contributed to Masses and parish life as Deacon for 11 years, serving the communities of St Patrick’s, Blacktown, now Mary Queen of the Family Parish, and Corpus Christi Parish, Cranebrook. His beloved wife, Jeanette, died on 4 October 2020. He passed away on Tuesday 2 November at the age of 80.

In your charity, please play for the Repose of the Soul of Deacon Owen and remember his family in your prayers.

View images from the Mass of Christian Burial here or below. 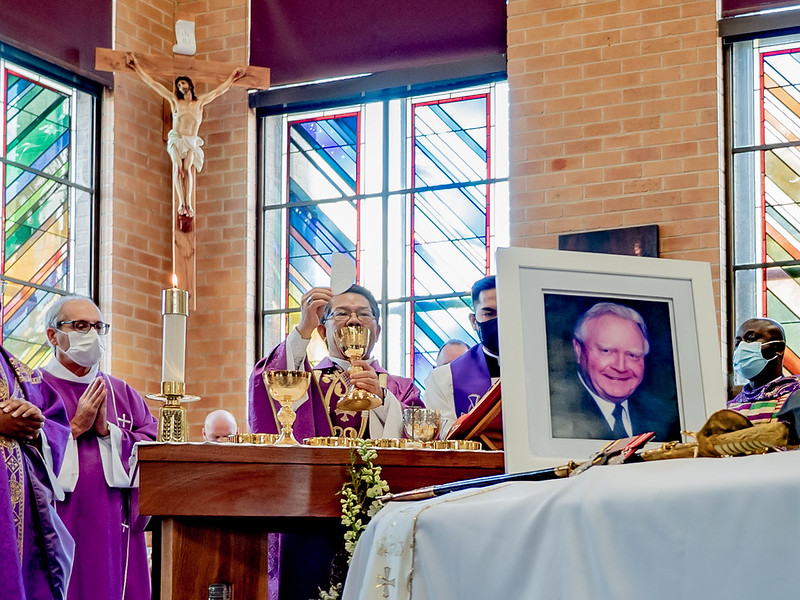