Holy Spirit sets the pace at the Plenary Council

Discussing the Second Assembly of the Plenary Council with Members from the Diocese of Parramatta, there was unanimous agreement that the Holy Spirit was at work in the process, albeit in a way that no one had predicted.

While concern about the events of the morning was evident, in reflection, the Members from the Diocese of Parramatta, felt the Holy Spirit was guiding the process.

Fr Chris de Souza VG EV PP, Vicar General and Episcopal Vicar for Education commented on the time allocated for discussion and deliberation. He felt allowing all points of view to be heard would be a good thing.

Fr Chris explained how, when Plenary Council vice president Bishop Shane Mackinlay told the Council the program would be paused to work through the issues raised that morning, he felt it was a sign the Holy Spirit had intervened. “The Holy Spirit works in more ways than a lineal line, a ‘Jacob’s ladder’,” he said. “There is also a disruptive way. It is enabling us to listen to the multitude of voices.”

Fr Wim Hoekstra EV PP, Episcopal Vicar for Clergy, noted the diversity of people involved in the Plenary Council – who “all need to be heard if we are to listen to the Holy Spirit”. “The process shows how wide the Church is,” he said. Fr Paul Marshall, Rector of Holy Spirit Seminary Harris Park, used his own Second Assembly group as an example of how the makeup of the Council reflected a cross-section of the Church. His group, he explained, consisted of a married person, an Eastern Rite Catholic, a bishop, a Christian Brother, and a couple of priests.

Carol Teodori-Blahut, who had witnessed with interest how many more women than men automatically stepped up to participate in the Aboriginal ceremony earlier in the proceedings, recognized that some issues raised would take time for the Church to process. “We must recognise that this is the beginning of a conversation that was buried,” she said, speaking about the motions that had not reached the majority votes required. “What I can offer them (young people) is encouragement to ‘hang in there’.”

“No matter how bumpy, that is the Spirit,” he said. “It would be unfair to limit the Spirit to the smooth areas only, or bumpy areas only. It is both. If we are rushing, the Spirit calls and we stop.

“The process is the action of the Spirit. We assume it is the group of people. But no, it is the Spirit talking to the people,” he said.

Motions agreed on during the first part of the Plenary Council

Motions agreed on in the days preceding Catholic Outlook’s discussion with the Members, included those concerning Aboriginal reconciliation and recognition of the spirituality of Indigenous communities, based on the NATSICC position paper Embracing Aboriginal and Torres Strait Islanders in the Life of the Catholic Church.

Other motions agreed on included those around abuse that has taken place in the Church, the treatment of survivors of that abuse, and a reaffirmation of the Church’s commitment to Safeguarding.

“There will be action coming out of the deliberative votes that will impact particularly Indigenous people within our community, and also in the area of abuse,” said Vicar General and Moderator of the Curia, Fr Peter Williams VG. “Coming out of the Royal Commission, we have passed some very substantive motions.”

Wendy Goonan felt the motions that has been passed at that point, were a positive step for the Church. “I know a lot of people have felt settled with the motions that have been carried around reconciliation with Aboriginal people,” she said. The healing lament and repentance liturgy was so suited to lots of uses especially on Safeguarding Sunday (which will be given a new name).”

Fr Paul Marshall was excited by how the approach encapsulated in these motions, particularly around Aboriginal spirituality, would add to the formation of the seminarians in the Diocese.

“It’s developing a movement forward of our Church in terms of theology, in terms of our reflection as an Australian nation, and the first day (of the Second Assembly’s discussion) around Indigenous issues was particularly pertinent to that,” he said. He described how one Elder spoke about songlines in the Milky Way and songlines in the Gospel. “It was a beautiful connection of creation with the Gospel and it is something as a Church we have still got a long way to go with,” he said.

At the time of writing, the Plenary Council was still to vote on a number of motions, including those that it had agreed to reconsider.

From there it will go through a number of steps, and the Vatican will make the final decisions on what it will approve. Each Diocese will have a synod to work through the implementation of the outcomes at a local level, said Fr Peter, adding that the Diocese of Parramatta has committed to this process. “Everything that happens here will be ‘distilled’ through the synod, including how it will be embedded at the parish level.”

All members agreed there was a strong sense of commitment in the room. “Everyone here is really working hard,” said Fr Peter Blayney, Episcopal Vicar for Migrant Chaplaincies and Pastoral Associates and Episcopal Vicar for Canonical Matters.  “They are long days, people have been preparing for years. I hope the darkness is overcome by the light.”

Bishop Vincent Long OFM Conv, Bishop of Parramatta, hopes the Church will be more available for those on the peripheries, and he is keen to see the Plenary Council succeed.

“There is a palpable sense of unity and direction here,” he said. “We expected some challenges and we saw them today.

“These issues being discussed, including Indigenous reconciliation, ecological integrity and women’s inclusion in governance and decision-making are of critical importance to the Church.

“The approach needs to consider people on the periphery who are removed from the life of the Church. We will make a conscious effort to promote their engagement,” he said.

See images from the Second Assembly of the Plenary Council by clicking on the album link below. 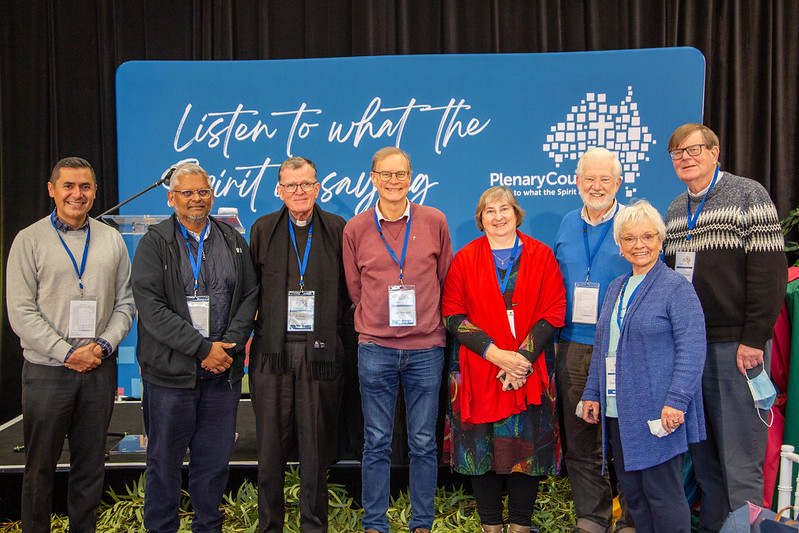 The Second Assembly of the Plenary Council runs from 3 to 9 July 2022.

The Diocese of Parramatta has a hub of Plenary Council resources and links which can be found at parracatholic.org/plenary

More information can be found at the official Plenary Council website plenarycouncil.catholic.org.au including a link to information about the motions and voting here.