It was a great delight to witness two men speaking from two perspectives – Most Rev Vincent Long OFM Conv, Bishop of Parramatta, and Dr Austen Ivereigh, journalist and papal biographer – reflecting what they understand Pope Francis is urging the Church of today to embrace.

With questions initially posed by moderator, Padmi Pathinather, on the vision that is often expressed by the Pope, Dr Ivereigh commenced by giving insights into Francis’ call for us as Church to take a more pastoral stance and avoid reducing Christianity to a set of precepts; Francis is urging us to engage society with the face of mercy rather than with the austerity of a rule book.

He reminded the audience of what has become the symbol of Francis’ pontificate when, as his first outing from the Vatican, he met the refugees on the island of Lampedusa in southern Italy.

Dr Ivereigh was enthused with the initiative of Plenary 2020 initiated by the bishops of Australia. He saw that as an opportunity to engage in true discernment, an essential “mechanism toward renewal”. He recognised that there would be skepticism of its efficacy in the eyes of many but did say that the world was watching its progress with interest.

To the doubters of the outcome of the Plenary 2020 process, his response was both practical and faithful: suggesting that we keep our expectations modest and not forget that the Spirit continues to work – to the extent of a new Pentecost that could embolden the official gatherings at the Plenary sittings in 2020/2021.

Bishop Vincent made many remarks which showed his resonance with Pope Francis’ pastoral approach.

Addressing clericalism has become a common subject for analysis, particularly its destructive impact on the health of the Church over the centuries. Bishop Vincent was critical of the imperial model of power as the way in which Church leadership has traditionally been exercised.

He did not recoil from reminding the audience of around 120 gathered in St Patrick’s Cathedral Hall that our faith communities were not the preserve of the ordained. Community parish life is the responsibility of the faithful shared with the pastor. The clericalist top-down exercise of power must shift into a servant-leadership model as imaged by the inversion of the hierarchical pyramid.

As an observer at the recent gathering in Rome to address the sexual abuse crisis, Dr Ivereigh was truly impressed with the dialogue and accounts presented at the gathering. He was confident that the discussion had given Pope Francis a mandate to review parts of canon law.

In the second part of the evening, questions were fielded from the audience. As a younger member of the Church, one questioner lamented his peers’ anxiety of Pope Francis’ pastoral approach overriding the more traditionalist approach to Church life. Dr Ivereigh acknowledged that such anxiety called for a willingness for parties of opposite views to participate in listening to each other’s experiences of Church.

The night was well attended with Lana Turvey-Collins and Fr Noel Connolly from the Plenary Council 2020 Facilitation Team, who took a great interest in the proceedings of the evening. Also present was Fr Andrew Fornal OP, parish priest of St Joseph’s Parish, Kingswood and Fr Paul Marshall, parish priest of Our Lady Queen of Peace Parish, Greystanes and Dean of the Central Deanery.

Michael Tan from the Diocesan Pastoral Council felt that both “Austen and Bishop Vincent spoke well, in an honest and open conversation that drew the audience into the depths and profundity of Pope Francis’ thinking and leadership in transforming the Church into a more synodal church.” He added further that “the Q&A session was also a great way to engage with the audience, with many of the questions being grounded in the challenges ahead in implementing the vision of Pope Francis in the Parramatta Diocese.”

The night was concluded with a vote of thanks to Ms Pathinather, and to Br Mark O’Connor who facilitated the participation of Dr Ivereigh. Austen shared a heartfelt prayer to conclude the evening.

Len Blahut is the Deputy Chair of the Diocesan Pastoral Council of Parramatta.

View images from the public conversation between Bishop Vincent and Dr Austen Ivereigh here or below. 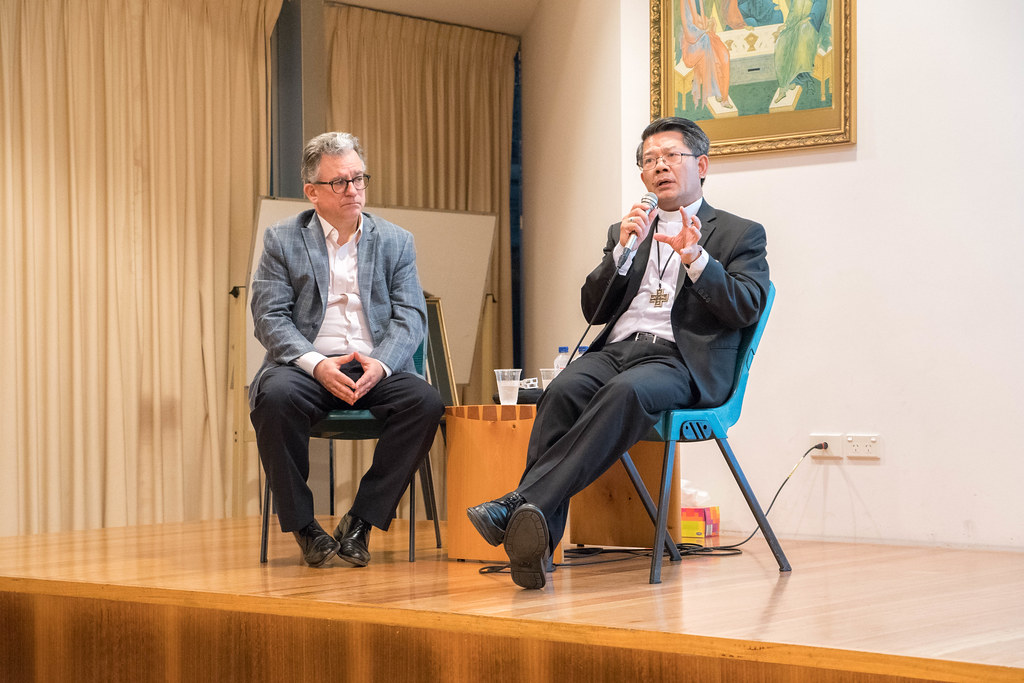