Parishioners of the Blue Mountains and other parts of Western Sydney pose for a photograph at the 'Blue Mountains Catholics Take Action' event at St Thomas Aquinas Primary School, Springwood. Image: Diocese of Parramatta

The question of how to relaunch parish life after COVID resulted in a dynamic information sharing session across the six parishes in the Blue Mountains last week, with valuable takeaways on topics such as music, the environment, child and adult faith formation and wellbeing.

The message across all workshops followed a similar theme: sharing our gifts and talents and talking with others builds the unity and strength of our Church.

Throughout the afternoon, participants took part in five workshops and were encouraged to ponder ‘where do we go from here?’ In grounding their thoughts for the day, participants were led in a reflection from Carol Teodori-Blahut, a parishioner of Our Lady of the Nativity Parish, Lawson, and a Diocese of Parramatta Member of the Plenary Council. Carol spoke about thinking of the Church as the people of God, rather than of the buildings, with Christ in the centre and his inspiration to guide us on how to serve the world.

“In any group we are in – whether it is our small groups here today, our parish, our country, our world – we should be able to give our gifts abundantly and we receive generously all the gifts of others that we lack,” she said.

As part of his music workshop, Chris Wilson, Head of Music at St Dominic’s College, Kingswood, shared his thoughts on the importance of music in our Church and in the liturgy. He applauded the work of church musicians, but shared that some do so in isolation, and that they could be assisted through discussion and sharing of resources across the Deanery.

As parishes prepare for the celebrations of Holy Week and Easter, Chris asked that parish priests and liturgy teams speak to their musicians openly about the role that music plays in supporting these liturgies.

Care for creation starts with conversation

With an encouragement for workshops to be pro-active, a team from Penola Catholic College, Emu Plains, were able to speak to parishioners about social justice and care for creation. Robert Feeney, Leader of Religious Education and Mission, alongside two student leaders Isabella and Maya, told Catholic Outlook that the inspiration for the session came from initiatives at their school.

“We wanted to understand and improve everyone else’s knowledge about what they do in their own homes as well as their wider community of how to be more sustainable, and get ideas for ourselves,” Isabella said.

“If we are going to make a difference in this world, if we’re going to dream of a better future, as Pope Francis says, we need to start by talking to each other and understanding the great stuff that people are doing already,” Robert added.

“The decisions that older people make will affect us young people in the future, so spreading awareness with all kinds of people allows them to give us a voice and to allow us to grow into an Australia that we can be proud of,” Maya said.

Kim Crawford, a member of the Deanery Pastoral Council, and one of the key organisers, explained to Catholic Outlook that the event was designed to encourage the different parishes in the Mountains to share resources, rather than working on things individually.

“The Blue Mountains encompasses 10 to 12 different villages, certainly six parishes, and in some sense, it does have an identity, a sense of unity,” Kim said.

“I think it is significant for us to get back together after COVID. I thought of this event almost as a relaunch of Church, of parish life. It’s almost a resurrection experience. Parishioners of the Blue Mountains and other parts of Western Sydney are seen in discussion during a workshop as part of the ‘Blue Mountains Catholics Take Action’ event at St Thomas Aquinas Primary School, Springwood. Image: Diocese of Parramatta

“It went from a passive gathering of talents to a positive, action-based one.

“I think it’s a good model, a good scaffold, for parishes getting to know each other.”

Sr Grace Roclawska csfn, Head of Formation for Mission thanked the participants and organisers for their dedication and enthusiasm in striving to put their faith into action. 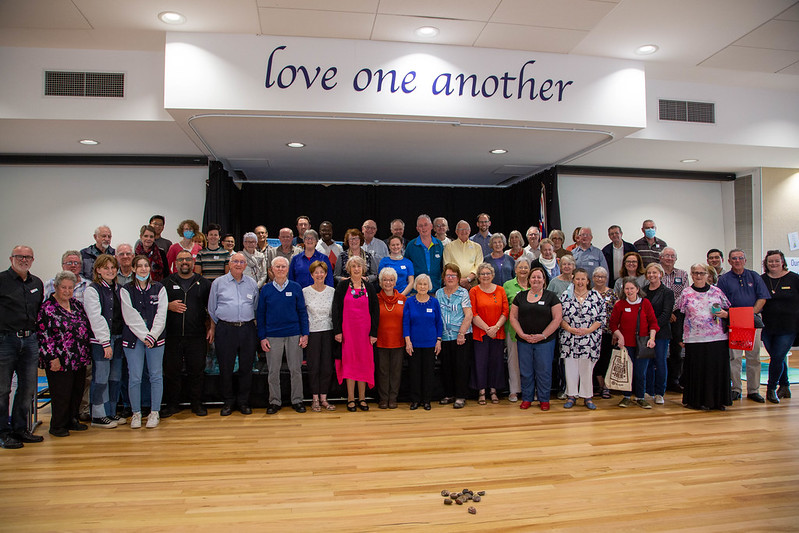