A welcome to the Catholic family on Easter Saturday

On Easter Saturday at least a dozen parishes in the Diocese of Parramatta welcomed catechumens at the Rite of Initiation of Adults.

At the Chinese Chaplaincy in the Diocese which is based at St Monica’s Parish, North Parramatta, 10 catechumens were baptised in the Catholic faith following the Easter Vigil Mass at which the Paschal candle is lit for the next year. As the flame is passed from parishioner to parishioner, the ceremony which starts in the dark, grows lighter with each flame.

It was a special night for many members of the Chinese Chaplaincy community, coming back together to worship together for Holy Week, after having to cancel Masses in 2020 due to COVID restrictions.

Connie is a member of the parish. “It was lovely to have everyone back,” she said. “When you come back you feel the special community spirit.” Connie said this spirit had been present throughout Holy Week with Masses crowded with parishioners keen to come together to worship as a community.

Connie was also godparent to one of the catechumens and was excited that after a year of preparation they were “joining the parish family.”

For Paul her husband, and one of the catechists who prepared a group of the catechumens, the past year has been unique. While having to conduct classes via Zoom initially did not feel as personal as face to face, he could also see the blessings which actually brought his group closer together.

“Nobody had holidays booked,” he laughed. “This meant there was 100 per cent attendance and less disruption to the group.” The catechumens, their godparents, catechists and supporters with Fr Ephraim Lam (centre) following the Rite of Initiation of Adults at the Chinese Chaplaincy at St Monica’s Parish, North Parramatta. Image: Diocese of Parramatta.

He shared why he loves taking the role of catechist. “When we share the scriptures, I share something from my perspective, but then the catechumens will share their perspectives and I learn from them.”

The 10 catechumens were filled with joy at becoming Catholic. Jorden felt the call after coming back to Australia from Hong Kong and needed to talk to Jesus.

Four members of the same family were all baptised at the service. Their mother, Astrid, who was baptised alongside her two children, Ashe aged 13, and Candace aged 10, and her husband Luke, told how the family decided together to become Catholic. “It just happened as a calling from God,” she said.

Fr Ephraim Lam, priest for the Chinese Chaplaincy at St Monica’s saw the catechumens baptism as just the beginning. “Tonight is not the end of their catechumen classes,” he said. “For them it is the beginning of living in communion with the Lord.”

To see the photos from the Easter Vigil Mass and the Rite of Initiation of Adults on Saturday 3 April 2021, click on the images below. 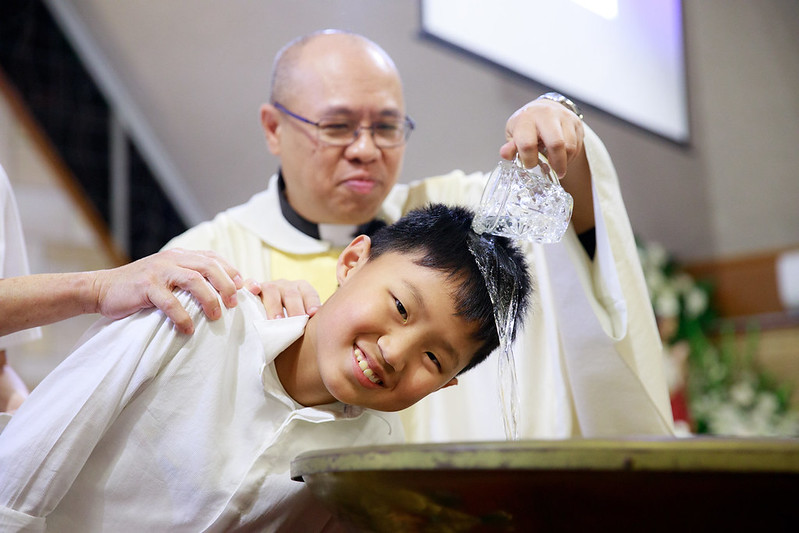