The following article was written for the LIFTED Breakfast with the Bishop, a forum for Year 12 student leaders organised by Catholic Youth Parramatta and Catholic Schools Parramatta Diocese (formerly Catholic Education Diocese of Parramatta).

This article was originally published on 29 June 2022.

In light of the statistic of one in eight Year 12 student leaders experiencing online bullying, broadcaster and journalist Erin Molan is full of admiration for those who lead in the Catholic schools in Western Sydney and the Blue Mountains.

Erin was the special guest speaker of the LIFTED Breakfast with the Bishop, a forum involving students from 25 systemic, independent and PARED schools in the Diocese of Parramatta, held at Commbank Stadium on Thursday.

Each year, the student leaders come together to share their honest thoughts on their 13 years of Catholic Education, as well as topics relevant to them as young people. These topics are raised by previous cohorts and determine the discussion points for future student leaders forums.

Erin spoke to the students about her experience of online bullying being a female journalist and presenter in the male-dominated rugby league sphere.

She never envisaged what the reaction would be to her career, not because of the hard work, persistence and research she put in, but because of her gender. She described that there were some dark times, sharing honestly about how some of the online threats moved to real life. At this time, she said it was time to fight back.

“The internet is a part of our lives, whether we like it or not,” Erin told the students. “I was lucky in that I was able to turn my trauma into a way to help others, so they don’t have to go through what I did.

“No one should have to put up with what I went through.

“I admire you young people for your ability to stand up for yourselves, and know that you don’t need a huge platform to make change.” The student leaders shared their own experiences with online bullying in their personal and school communities, and came up with some suggestions on how to make being online safer for young people.

Several students spoke of having seminars where victims of online bullying share their personal stories to students as an early preventative measure. Other students also recommended that education on social media and cybersafety should begin at younger ages as they are being exposed to the internet at younger ages than the leaders themselves.

One student encouraged the student body to call out online bullying in your friendship circles and calling out “lad culture”.

Another student reinforced the faith foundation of our schools as a way to combat online bullying, saying that Jesus’ whole mission was to love everyone, and as student leaders, they need to be more intentional to living that mission, and not condoning things that go against it. Students examined the topic of consent in all its forms, not just in a sexual nature, and what it looks like in their lived experiences.

They suggested consent be discussed in the school curriculum, how education around consent should be a continuous conversation, and reinforced the idea that ‘no’ is a ‘complete sentence’ and doesn’t need to be explained or elaborated on.

Bishop Vincent Long OFM Conv, Bishop of Parramatta, expressed his thanks for the conversations that were taking place, saying that he had learnt a great deal from the students’ wisdom. “I hope that the time you have been with us in your schools and learning communities, you have been able to solidify your sense of who you are and you have created safe and strong places where you can engage with the very complex world ahead of you and around you,” he said.

“When it comes to online bullying, remember that you are no less than the person you are because of the bullying levelled at you.

“Know that you have our love, support and prayers as you go forth and be all that you can be in the changing world according to the values of the Gospel.” “You are in a particular point in time. You will go from here into a whole range of different things, but you will forever be a part of our story and we value that,” he said.

“I’m looking forward to your songline enriching the next generation that come through.

“I want you to sing your song and sing that song powerfully.” To validate the day’s discussion topics, students were invited to complete a survey before the event. The statistics showed:

The LIFTED Breakfast is part of a series of initiatives for Year 12 student leaders organised by Catholic Youth Parramatta and CEDP, following on from the annual LIFTED Leaders program run in February.

View images from the LIFTED Breakfast and Student Leaders’ Forum here or below. 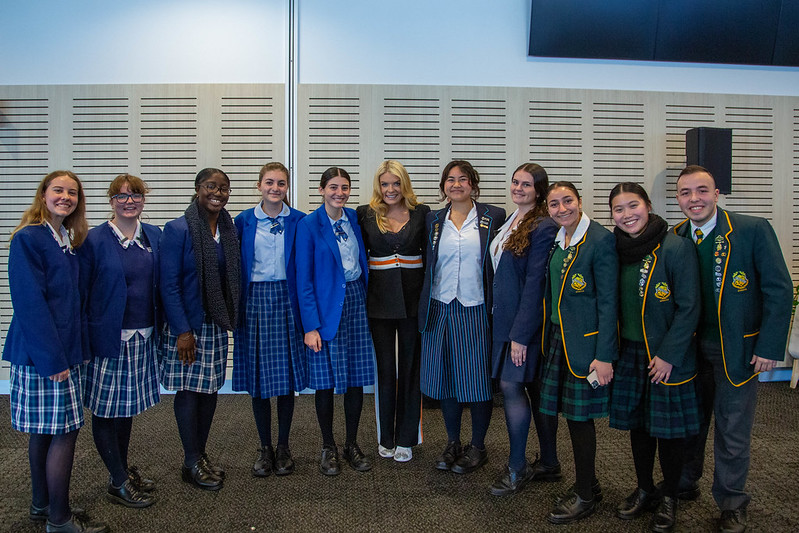