The deaf and hard of hearing community across Sydney have celebrated a milestone.

On Sunday 4 August, the Ephpheta Centre celebrated their 40th anniversary with Mass and a luncheon.

Bishop Vincent Long OFM Conv, Bishop of Parramatta, was the principal celebrant for the Mass. Hundreds of Ephpheta Centre volunteers, members, families and friends were in attendance at St Patrick’s Cathedral, Parramatta.

View images from the Ephpheta Centre’s 40th Anniversary here or below.

Concelebrating were Fr Fernando Montano and Fr Shinto Francis from St Bernadette’s Parish, Castle, Hill, Fr John-Paul Escarlan from Mary, Queen of the Family Parish, Blacktown, Fr Michael Lanzon, Chaplain to the Deaf at the Ephpheta Centre and administrator of Our Lady of the Assumption Parish, Homebush, and Fr John Hill, former Chaplain to the Deaf in Melbourne. The Ephpheta Centre is for deaf and hard of hearing people and offers Catholic pastoral care, sacramental services, support and advocacy.

Named in honour of a passage from Mark’s Gospel (Mk 7:31- 37) in which Jesus cured a deaf man, the Ephpheta Centre, which means “be open”, is located in Punchbowl and is a ministry supported by the Archdiocese of Sydney and the Dioceses of Parramatta and Broken Bay.

The Ephpheta Centre is also supported through generous donations from the Parramatta Catholic Foundation.

During Mass, Bishop Vincent said the Ephpheta Centre has opened up new opportunities to many members of the deaf and hearing impaired community.

“Today, we welcome the Ephpheta Community to our Cathedral and join them in the celebration of the 40th anniversary of their foundation. True to their biblical name, they have opened new possibilities to many of the deaf and hearing impaired and their loved ones.

“Ephpheta is deeply rooted in Jesus’ vision of a community of solidarity and empathy which in turn has an empowering effect on the society. Our diocese is blessed to join them in this vision through The Catholic Foundation.

“Let us pray that we learn to operate out of Jesus’ vision of shared communion as opposed to self-centered accumulation. May our sharing at this table strengthen us in our commitment to strive for the common good according to the values of the Gospel. May we live out the passion of Christ to be men and women for others.” The Ephpheta Centre was launched in August 1979 out of the need to deliver services for the Catholic deaf community in Sydney in the 1970s. The centre started through a continuation of the Catholic education that the Christian Brothers and the Dominican Sisters provided to the deaf community.

“Really, Ephpheta Centre is similar to a parish in a lot of ways, but it’s a little bit different. For my church, if I want to go to Mass, I can leave it until five minutes before, run out the door and arrive at Mass on time. A lot of our community, because we support three dioceses – Parramatta, Broken Bay and Sydney – we have people who drive down two hours to come to Mass here,” Liz McDowell, Manager of Business at the Ephpheta Centre explained.

“So, we have an incredibly devout community who really value our service and value their faith. Our role is to support deaf people in that way – in the religious side – and, at the same time, the pastoral side. Pastoral work is a lot of our work.”

“It’s like a special place for deaf people. It’s a lovely place for all of us to come. Every time we come here, we feel a sense of joy. It’s a very special place here. It’s a wonderful place to come if I have any worries or problems. It’s too good to be true. It is like home,” Jill, a member of the Ephpheta community, said. David Parker, Manager of Community, said, “There are not many places that deaf people can gather, where people can speak in their own language – in Auslan. Imagine if the Ephpheta Centre isn’t there – there would be nowhere for deaf people to go, to gather.”

“I think what makes Ephpheta Centre special is that we have a mixture of hearing, deaf, deaf blind, hard of hearing – all different kinds of people with all types of difference. But it’s the human experience that we have and the interaction – we accept different people with different identities and languages,” he added.

Following Mass, the Ephpheta Centre celebrated with lunch at the PARKROYAL Parramatta. To donate in honour of the Ephpheta Centre’s 40th Anniversary, visit www.yourcatholicfoundation/donate

Your gift will provide pastoral, sacramental and social support, enabling the deaf and hard of hearing, the vulnerable and isolated, to make meaningful connections and participate fully in their community, their faith and Catholic Church life.

View images from the Ephpheta Centre’s 40th Anniversary here or below. 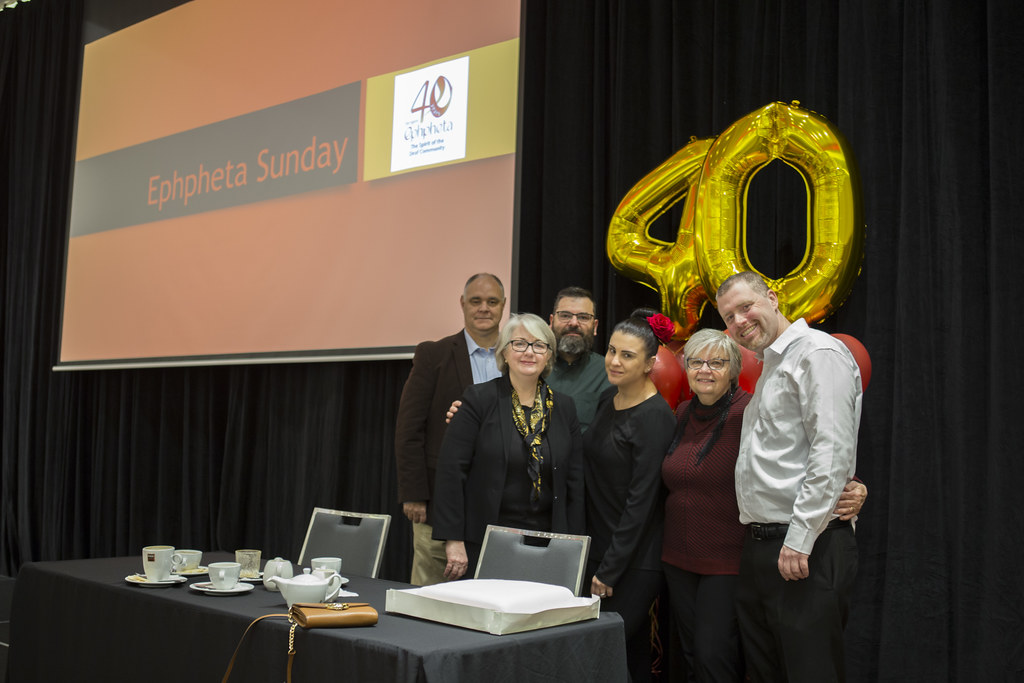