Five new Catholics encouraged to live out their baptism

Growing up, 22-year-old Brandon would attend Mass with his family. But he always felt that he couldn’t fully participate.

Now, he has become what he calls “a true Catholic.”

As part of the Rite of Christian Initiation of Adults (RCIA), Brandon, alongside four other adults – Lecky, Jenny, Ady and Abi – received the Sacraments of Initiation – Baptism, Communion and Confirmation – during Mass at St Patrick’s Cathedral, Parramatta, on Saturday 4 July.

Unable to be welcomed into the faith during the traditional Easter Vigil, the new Catholics were baptised and confirmed by Fr Bob Bossini, former Dean of the Cathedral.

It was with “great joy” that the catechumens were welcomed into the faith community, Fr Bob told the congregation. Catechumen Brandon gets baptised during the Rite of Christian Initiation of Adults at St Patrick’s Cathedral, Parramatta. Image: Diocese of Parramatta.

“Last year, my aunty, [a parishioner of St Patrick’s Cathedral Parish], called me up and said that there were RCIA meetings taking place, and she thought that maybe it was time for me to get baptised.

“It took me a while to think about it, to be honest, because I thought that being 22-years-old, I should’ve been baptised and confirmed when I was a baby, and I was worried about what everyone would think.

“I overcame that fear, and realised that it’s more than that, it’s about my faith and it’s about how I want to continue the rest of my life and be a proper Catholic,” he said. Catechumens Lecky (left) and Jenny, with members of the RCIA support team, during the Rite of Christian Initiation of Adults at St Patrick’s Cathedral, Parramatta. Image: Diocese of Parramatta.

Married couple Lecky and Jenny told Catholic Outlook that undertaking the RCIA program together has made the experience meaningful.

“We joined the journey of the RCIA [program] to learn more, as our background is not religious, and we wanted to learn more about being Christian,” Lecky said. “Throughout the journey, we’ve learned a lot, and thank everyone in the RCIA program who has helped us a lot. We know that the whole journey will go through our whole lives.”

Jenny added, “When I first went to church when I was a little kid, I didn’t quite like it at the time. I wasn’t ready. But now, it’s a totally different journey.

“We can support each other in our coming to the RCIA program, which is good because we learned what we are doing and the meaning behind it. That makes it much more meaningful,” she said. Deacon Rod Pirotta delivers the homily during the Rite of Christian Initiation of Adults at St Patrick’s Cathedral, Parramatta. Image: Diocese of Parramatta.

During his homily, Deacon Rod Pirotta, who leads the RCIA program at the Cathedral, encouraged the catechumens to live the sacraments they were to receive, rather than just receiving them.

“To the five new candidates who are receiving the Sacraments of Initiation, I urge you to live the mysteries the same way Christ has reigned as a King; not to mix meekness with weakness. Let us be the face of Christ to others by ‘riding on a donkey’ not parading on horses and chariots.

“The fruit of the Sacraments is grace. Let us be open to the grace (gifts) of the Holy Spirit, so that we walk the walk not with words but with deeds. Let us live the Sacraments, not just receive them,” Deacon Rod said. Catechumens Ady and Abi during the Rite of Christian Initiation of Adults at St Patrick’s Cathedral, Parramatta. Image: Diocese of Parramatta.

Coming from a different religion, they both expressed the joy they felt upon learning about Christianity.

Ady said, “I converted to Christianity having gone through times of questioning my religion. In looking for the right religion for me, I requested to become a Catholic.

“The program is essential because this time last year, when I started the RCIA, I had different thoughts and understanding about what it really means to be a follower of Jesus and a Christian. The RCIA program has helped me to understand the focus and importance of becoming a true and full Christian.”

In describing what it would feel like to be welcomed into the Catholic family, the neophytes, the term given to them in their first year of being a Catholic, said that they were all excited for the day, despite the limitations in place due to the ongoing pandemic.

“I’m feeling excited for next week because I get to be baptised and I get a new life,” Abi said with a smile on her face.

Lecky explained that it didn’t matter how many people would be in attendance at Mass, “it’s a sacrament you can only have once in your life. It’s meaningful for me. I’ve been waiting for this for a long time, I can’t wait for it. It’s a new journey for me.”

Ady said, “I feel that it’s unfortunate that we were not able to be part of the Easter celebration, but the celebration of Baptism and Communion is for the Church in spirit. When we are in communion in spirit, it’s not just in Parramatta, it’s throughout the world, and with all the angels and saints.”

For Brandon, being welcomed into the faith is going to be a “heart-warming” and “life-changing experience.” The neophytes wished to thank their family members as well as the members of the RCIA team who had supported and accompanied them to their initiation, even so much as to becoming godparents.

“I always have my aunty in my mind whenever I come to church because she’s the first one that brought me into the church over 20 years ago,” an emotional Jenny said.

Abi added, “I had a lot to learn, and I thank the people here for teaching me about Jesus.”

Brandon concluded, “To be able to take communion, I feel that I am a true Catholic, and that’s probably one of the best parts.” 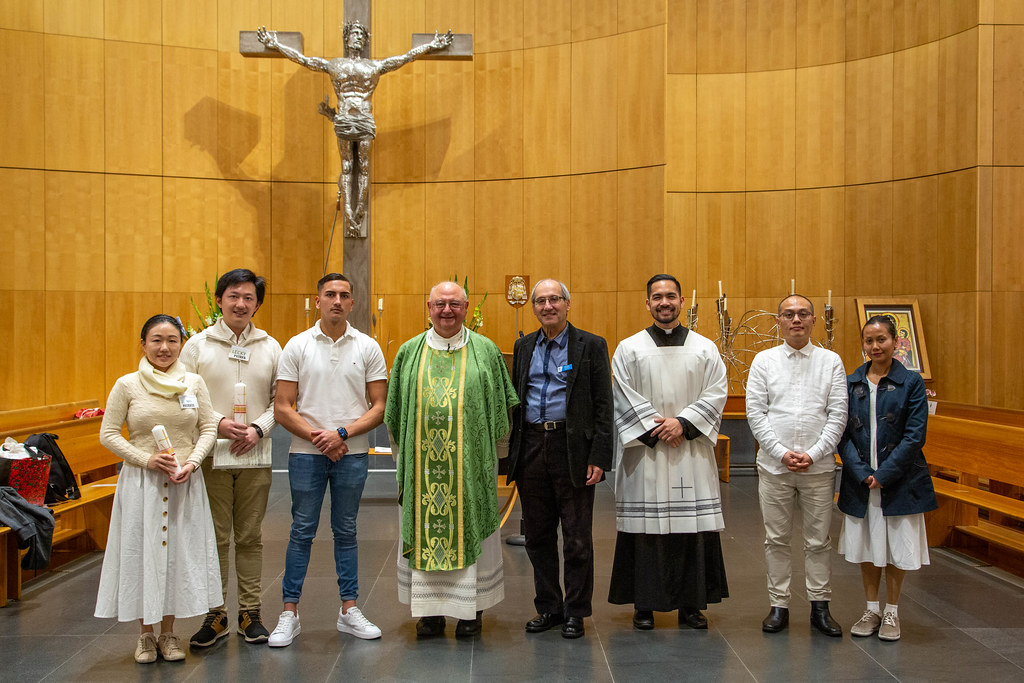