20 parishioners from Mary, Queen of the Family Parish, Blacktown attended the Open Day of the Afghan Osman Mosque on Prince Street, Blacktown on 28 October 2017.

Most Rev Vincent Long OFM Conv, Bishop of Parramatta, also attended in a sign of friendship and interfaith dialogue. This was the third year a group of parishioners attended the Open Day, led by Fr Peter Confeggi, Parish Priest of Blacktown.

View images from the open day below or click here. 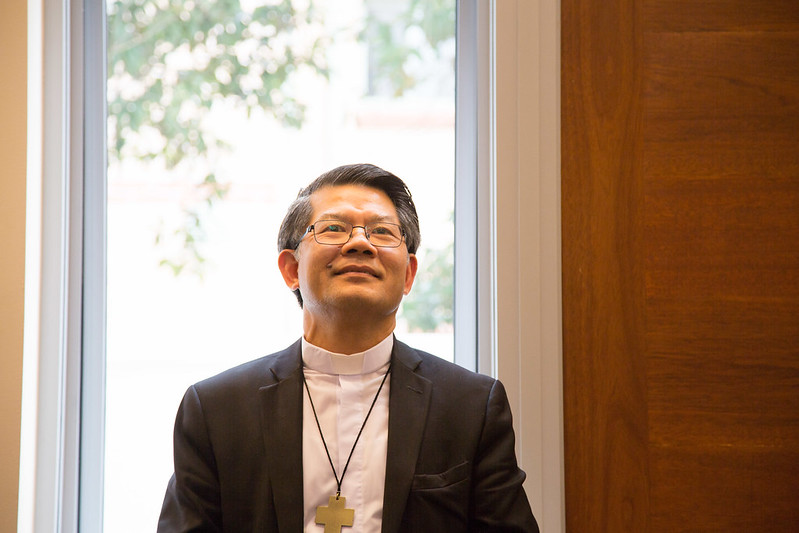 Bashar Asadi led the tour organised by the organisation Noble Mission, which is dedicated to spreading Islam. The educational banners were sponsored by the Sheikh Abdulla Bin Zaid Al Mahmoud Islamic Cultural Center in Qatar.

This was the first time some parishioners learnt the basics of Islam.

“We were amazed to discover that Jesus is referenced as a prophet numerous times in the Quran!” Natalia Gabriel, parishioner at Mary, Queen of the Family Parish, said.

Bashar clearly explained the similarities and differences between the Catholic faith and Islam, such as common reverence for the Blessed Virgin Mary and the Patriarch Abraham. Islam has a different conception of God, he said, namely the denial of the Holy Trinity and the Divinity of Christ.

Parishioners asked questions of Bashar, a charismatic speaker, who was open to any questions and answered with engaging anecdotes.

After the tour of the educational banners in the mosque car park, the group entered the mosque, removing their shoes and listening to some chanting from the Quran.

There are approximately eight places hosting Islamic prayers in the greater Blacktown region and the Afghan Osman Mosque on Prince Street is a beautiful mosque with a light blue dome and minaret. The interior is decorated with colourful calligraphy and gold leaf.

Fr Peter Confeggi explained the purpose of the mosque visits is to break down suspicion and learn about Muslim heritage. A relevant point for Christians is that the revered Catholic Philosopher and Doctor of the Church, St Thomas Aquinas did not have access to original Greek copies of Aristotle, he said.