Bishop Vincent Long during his performance at LIFTED Live in the Forecourt. Image: Diocese of Parramatta.

Catholic Youth Parramatta’s LIFTED Live in the Forecourt brought young people from the Diocese of Parramatta and beyond to the footsteps of St Patrick’s Cathedral, Parramatta, on Saturday 26 October.

The fifth annual LIFTED Live in the Forecourt celebrates the spirit of youth and the feast day of St Pope John Paul II, founder of the Diocese of Parramatta, and of World Youth Day.

View images from LIFTED Live in the Forecourt here or below.

The evening was filled with rides, carnival games and stalls selling a variety of food options and merchandise. Members of the Antioch Youth Movement from The Good Shepherd Parish, Plumpton, perform during LIFTED Live in the Forecourt. Image: Diocese of Parramatta.

Young people from parish youth groups and students from high schools across the Diocese performed live music across two different stages during the evening.

Following the success of last year’s LIFTED Live, the Cathedral again opened its doors for youth to spend time in prayer and reflection, with the Exposition of the Blessed Sacrament and Reconciliation made available in the Cathedral throughout the night.

Young people were also invited to attend the 6pm Vigil Mass at the Cathedral, which was celebrated by the Cathedral Parish assistant priest Fr Chris del Rosario.

Special guest Bishop Vincent Long OFM Conv, Bishop of Parramatta, was welcomed to LIFTED Live, and attendees were asked to answer some True or False questions about the Bishop. Bishop Vincent Long during his performance at LIFTED Live in the Forecourt. Image: Diocese of Parramatta.

Bishop Vincent then was encouraged to ‘go out into the deep’ with a surprise performance.

Bishop Vincent sung a karaoke version of the 1984 song I Want To Know What Love Is by Foreigner, a song he frequently cites in his homilies.

The performance started off as a solo, before the crowd started singing along, waving their smartphone torches.

After a performance by high school student Chris Watters, from Our Lady of the Rosary Parish, Kellyville, the teams that would be competing in the upcoming LIFTED Sports Day on November 24 were announced. Gelina and Laura from the Embers Basketball ministry during LIFTED Live in the Forecourt. Image: Diocese of Parramatta.

Members from the Embers women’s basketball group, a local women-only community group who play basketball in Castle Hill, spoke to the crowd about their ministry.

The Embers ministry, who ran a basketball-themed carnival game on the night, started in 2013 as a group of women who were interested in basketball and continuing their journey of faith together, and has grown into a strong community of players, coaches, family members and supporters who are all involved.

“Embers is more than just basketball,” team member Gelina told the crowd, “Embers is also about faith and sisterhood. It’s about community and enjoying life together.”

Later on in the evening, three young people were encouraged to share their youth ministry journey over the past 12 months. Jen from Our Lady of the Angels Parish, Rouse Hill, explained that it was inspiring to be a youth leader and having young people coming up to her and wanting to know her story, and that the kids have “opened up their hearts up to me and the least I could do was open my heart up to them.”

Tara from St Patrick’s Parish, Guildford, spoke about the launch of her parish’s new youth group, saying that she felt that God was calling her to be a youth leader and the youth group is a great way to build community.

Anaru from St Finbar’s Parish, Glenbrook said that his year in youth ministry has been “exceptional,” following from his experience as a World Youth Day 2019 Panama pilgrim, and he hopes to ignite and expand youth ministry in the Blue Mountains.

Members from the Blacktown-Nepean Youth For Christ group closed the night with performances of pop culture songs as well as worship songs.

LIFTED Live in the Forecourt was the second step in the formation program of pilgrims across the diocese preparing for the Australian Catholic Youth Festival (ACYF) 2019 in Perth. Bishop Vincent will join with pilgrims for the second formation session at St Luke’s Catholic College, Marsden Park on Wednesday 13 November, before the group is commissioned at Mass on Sunday 1 December at St Patrick’s Cathedral, Parramatta.

View images from LIFTED Live in the Forecourt here or below. 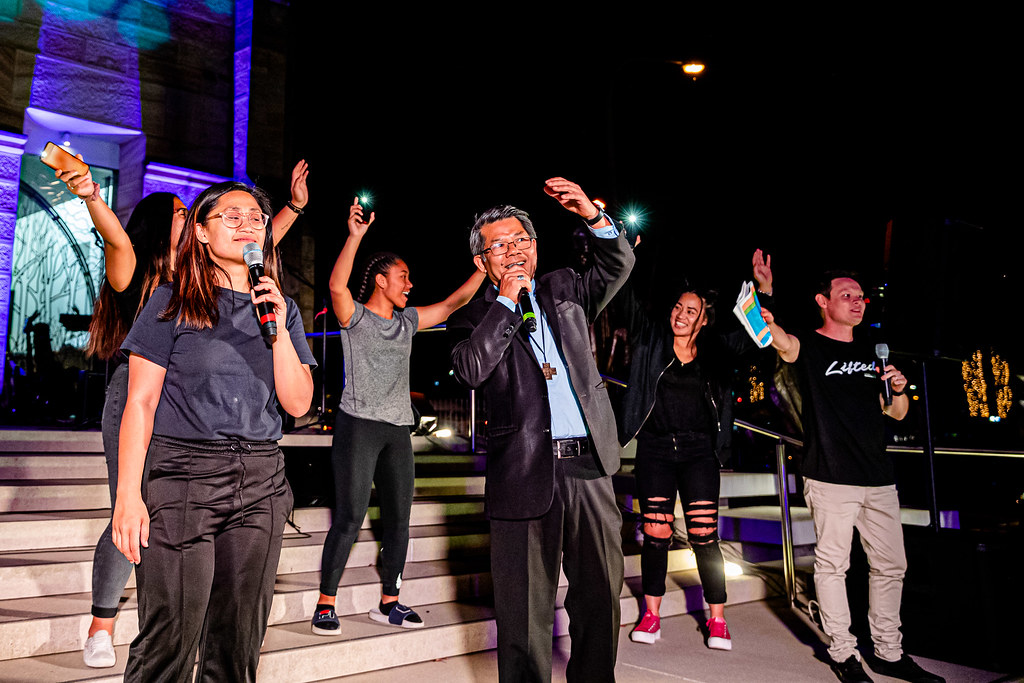