Bishop Vincent (4th from right) with guests at the Interfaith Iftar Dinner. Image: Diocese of Parramatta.

On Monday 20 May 2019, the Diocese of Parramatta and the Columban Centre for Christian-Muslim Relations co-hosted an Interfaith Iftar Dinner at the St Patrick’s Cathedral, Parramatta.

The iftar dinner is when Muslims, who fast from dawn to sunset during the month of Ramadan, break their fast. More than 50 guests attended including representatives of the Baha’i, Buddhist, Hindu, Jewish, Muslim and Sikh communities, politicians, university academics, leaders from other churches and representatives from the Diocese of Parramatta. It was truly interfaith and ecumenical. 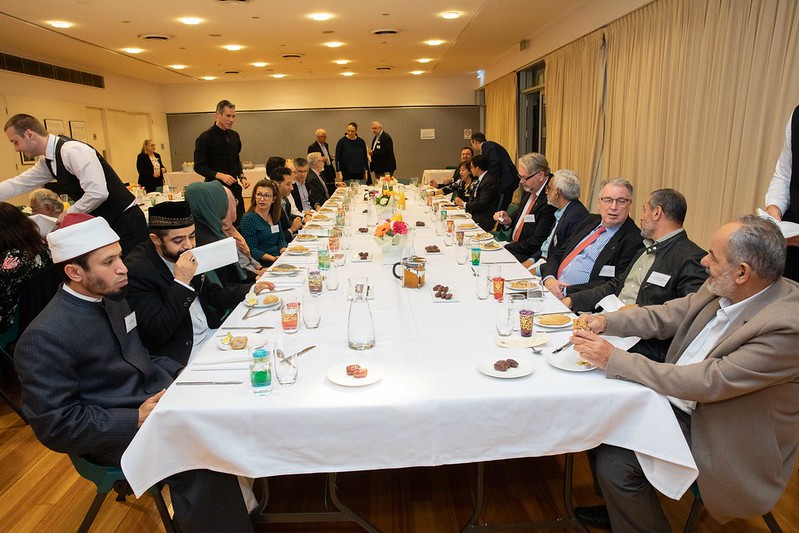 The proceedings began precisely at sunset with the Azan (The Muslim Call to Prayer) recited by Sheikh Eid, a visiting scholar from Al-Azhar University in Cairo who is assisting with religious services in the Parramatta Mosque during Ramadan.

It was inspiring to hear the chant of the Azan wafting through the Cathedral precincts.

The Muslim guests then broke their fast with dates and water, as per the sunna or custom of the Prophet Muhammad, after which they prayed the evening prayer.

After the Acknowledgement of Country, Bishop Vincent warmly welcomed everyone present.

He noted that western Sydney is multicultural and multi-religious. He affirmed this as a richness, a blessing, a cause for celebration. As the Catholic leader in western Sydney and the Blue Mountains, he said, “In these troubled times, when evil forces seek to divide us on the basis of race, colour, ethnicity or religion, may Muslims, Christians, people of all faiths, and all people of good will remain united in heart and mind and resolve. May faith bind us in human solidarity, hope drive out fear, and love overcome hatred.”

Rev Dr Patrick McInerney, Director of the Columban Centre for Christian-Muslim Relations, added a few words of welcome. He addressed all as “sisters and brothers”, as per the opening sentence of Pope Francis’ and Sheikh Tayeb’s joint Document on Human Fraternity for World Peace and Living Together, which states, “Faith leads a believer to see in the other a brother or sister to be supported and loved.”

He then recited a ‘grace before meals’ in Arabic, which included the line, “make us worthy to sit together at your heavenly table”. This resonates with the fifth chapter of the Qur’an, called Surah Al-Ma’idah (The Surah of the Table).

Sheikh Eid then did a Qur’an recitation, which included the following verse, “O humanity! Behold, We have created you all out of a male and a female, and have made you into nations and tribes, so that you might come to know one another. Verily, the noblest of you in the sight of God is the one who is most deeply conscious of Him.” (Surah Al-Hujurat [The Rooms], 49:13).

Sheikh Mosaad Issa, Imam of the Parramatta Mosque, gave the keynote address. He emphasised the importance of interreligious dialogue. Referencing the above quote from the Qur’an, he noted that this verse is not addressed to Muslims only, but to all people. He concluded that we are commanded by God to get to know each other, to show respect and kindness, to cooperate with each other, and to do this in practical ways in our daily lives.

During the meal, the guests from the different religions did as Sheikh Mosaad had suggested. We chatted and came to know each other better. A wonderful, friendly atmosphere prevailed throughout the evening.

After the main course, Mr Bernard Kirkpatrick and members of the St Patrick’s Cathedral Choir performed several hymns. Mr Kirkpatrick explained the hymns beforehand. The Christian chants resonated with the Quranic recitation earlier in the evening, providing a spiritual bond among all the guests. As Fr Patrick noted, the final Taizé hymn was a Christian version of the Muslim dhikr (prayer of remembrance).

After dessert, Bishop Vincent presented gifts of appreciation to the Sheikhs and to the choir members. Photos and selfies cemented new friendships and were posted on social media.

The Muslim guests particularly appreciated that the Catholic Church had taken this initiative to host an iftar dinner during Ramadan. They welcomed it as an expression of respect and acceptance. They also appreciated the opportunity to hear Christian hymns and have then explained. The similarities in chants gave a spiritual connection.

As the guests departed, there were promises to follow up on our friendships during the coming year and to have an even bigger interfaith iftar next Ramadan.

Eid al-Fitr, the Feast at the end of Ramadan, will occur around about the 5th of June (depending on the sighting of the moon).  As a gesture of friendship and solidarity, I suggest Catholics offer feast day greetings to Muslim neighbours, colleagues and friends.  The traditional greeting is Eid Mubarak (= Happy Feast, Blessed Feast).  It would also be appropriate for parishes to include a prayer for Muslims during the Intercessions at Mass.  It can be as simple as “We pray for Muslims who are observing the month of Ramadan at this time / who are celebrating Eid al-Fitr (the religious feast day at the end of the month of Ramadan) at this time.  May they find grace and favour in God’s eyes.  Lord, hear us.”  “Lord, hear our prayer.”