Five married men take next step on path to ordination

Five married men have taken the next step on the path to being ordained as permanent deacons for the Diocese of Parramatta.

On Tuesday, May 17, Bishop Vincent Long OFM Conv, Bishop of Parramatta, formally called the men to Candidacy to Holy Orders during Mass at St Nicholas of Myra Parish, Penrith.

During his homily, Bishop Vincent encouraged the men, their families and friends, and the wider community to encounter the living Christ “beyond fixed walls and boundaries”.

“We must learn to witness to him in our acts of solidarity, hospitality and service to the least of His brothers and sisters,” Bishop Vincent said.

“Candidacy is a commitment to self-sacrifice, humble service and servant leadership. It is to follow the example of Christ who came not to be served, but to serve.”

Bishop Vincent also thanked and prayed for the men’s wives, whom he described as being “integral” to the men’s formation and eventual diaconal ministry. The five men accepted to candidacay for ordination to the permanent diaconate and their wives (back from left) Alicja and Charles Abela, Charity and Batsirai Maringehosi, David and Dee Dowling and (front from left) Theresa and Jerome D’Rozario, Deacon Tony Hoban, Bishop Vincent Long and Alan and Jaclyn Skofic. Image: Diocese of Parramatta.

“I am convinced that if Christian ministry has a better future, it has to find expression in better mutual support, collaboration and partnership.

“We celibate clergy have a lot to learn from you as you seek to embody the ideal of Christian service not only in how you minister, but also in how you nurture your relationships.

“May we learn the art of living in God’s presence: our identity grounded, our commitment deepened and our mission nurtured for greater service of the Kingdom.”

Read about our new diaconate candidates below: Charles was born in Pieta, Malta, an identical twin to his brother, Joe. He moved with his family to Australia at the age of two. The family initially settled with extended family members in Toongabbie.

Charles undertook studies in mechanical engineering at the University of Technology via Nepean College and now works in the mining supplies industry.

After some time out of the Church, World Youth Day 2000 was a turning point for Charles’ return to the Church. Though single, Charles did not follow the impulse to explore priesthood, as he felt called to be married. In January 2013, he went to a summer school of evangelisation for the fifth time, where he met his future wife Alicja. They were married in November 2013.

Charles and Alicja are both members of Disciples of Jesus. They were parishioners at Corpus Christi Parish, Cranebrook but are now part of St Joseph’s Parish, Kingswood, where Charles is undertaking his pastoral placement. David is the youngest of 9 children, born into a Catholic family in Ireland.

David’s faith was enlivened after they returned to Australia in 2002. While searching for work, he came across a book which introduced him to scripture. David felt that he would be called to specific ministries in time. He took the invitation and ended up President of the Management Committee of the Vinnies Cardinal Freeman homeless centre at Granville.

After assisting in the RCIA in his local parish of Baulkham Hills, David felt called to create a “youth movement” in the parish, as nothing existed for young people. He has also led renewal programs such as Alpha.

David runs his own business consultancy and the Ray White franchise in Castle Hill.

David’s home parish was the Parish of Baulkham Hills but he has been in pastoral placement at St John XXIII Parish, Glenwood-Stanhope Gardens. Jerome was born in a village called Hashnabad, in the district of Dhaka in Bangladesh into a Catholic family. He is the third of five children – three sons and two daughters. His mother and father and eldest brother are now deceased. His other siblings still live in Bangladesh.

Jerome spent his childhood in a small village. He became involved with his parish from an early age, first in the altar boys club, but in other involvements. He was encouraged to enter the seminary by the sisters associated with his Church.

Jerome entered the seminary training for priesthood, and left in 1982. He met his future wife, Theresa, soon after leaving, and they married in January 1983. The couple moved to Australia in March 1983 and commenced study as a student at La Trobe University in Melbourne. Jerome and Theresa moved to Sydney for financial reasons. Eventually, Jerome bought Angels Kindergarten, a Child Care Centre in Mt Druitt, 21 years ago. He continues to own and manage it with his wife, Theresa.

They have an adult son and twin adult daughters.

He has served in liturgical ministries, as a financial committee and parish event committee member and volunteered for 17 years with the St Vincent de Paul Society. He is also a volunteer with the Bangladeshi community as a senior leader, organising cultural events, community events and provides prayer services for those in that community.

Jerome’s home parish was Sacred Heart Parish, Mt Druitt South but he has been undertaking his pastoral placement with St Luke’s Parochial District in Marsden Park. Batsirai was born in Mutare, Zimbabwe and grew up in the rural area of that country. He has five brothers and five sisters, all living in Zimbabwe. He has a Carmelite uncle in Zimbabwe. Batsirai has very deep feelings for the plight of his family in his homeland. He has witnessed much suffering.

Batsirai and his family moved to Australia in 2004, settling in Wentworthville, and became a parishioner of Our lady of Mount Carmel Parish and served as a member of the RCIA team and an acolyte. He works as a qualified commercial electrician.

Batsirai was instrumental in starting a support group for Zimbabwean Catholics in Australia “ZimCatholics”. The aim of this was to help Zimbabwean Catholics adapt to the Australian Church. This has formed a strong and growing community. He has travelled to Melbourne and Perth to assist Catholic communities. He also initiated the idea of holding an annual interstate “ZimCatholics” conference. In September 2014, Batsirai was elected Chair of the Interstate Congress organising Committee. The event has run for the last five years, averaging 300 delegates.

Batsirai is the liturgy coordinator of the African Mass organising team. He is also involved in marriage preparations within the Diocese.

Since joining formation, Batsirai moved to the new suburb of Caddens and worshipped at Corpus Christi Parish, Cranebrook. His pastoral placement is at Our Lady of the Rosary Parish, St Marys. Alan was born in Wollongong to Slovenian parents. He was the youngest of two brothers.

Alan has been involved in liturgical miniseries, assists at Baptisms and has had involvement with Kairos Prison Ministry.

Alan’s home parish was St Thomas Aquinas Parish, Springwood but he has been on pastoral placement in St Mary of the Cross MacKillop Parish, Upper Blue Mountains and Sacred Heart Parish, Blackheath.

Alan says his view of diaconate has evolved during his formation journey, which has been a life changing experience for him. There are a further nine men in formation for the diaconate in our diocese. The formation program involves two weekends and eight Saturdays each year, in addition to undertaking Bachelor of Theology studies.

Our diocese is also hosting the National Deacons Conference for Australia from 13 to 16 October this year at St Joseph’s Retreat Centre, Baulkham Hills. All deacons and their wives, as well those in formation and anyone interested in the diaconate are welcome to attend.

Deacon Tony Hoban is the Pastoral Director of St Luke’s Parochial District, Marsden Park and the Director for Formation for the diaconate in the Diocese of Parramatta.

View images from the candidacy Mass here or below. 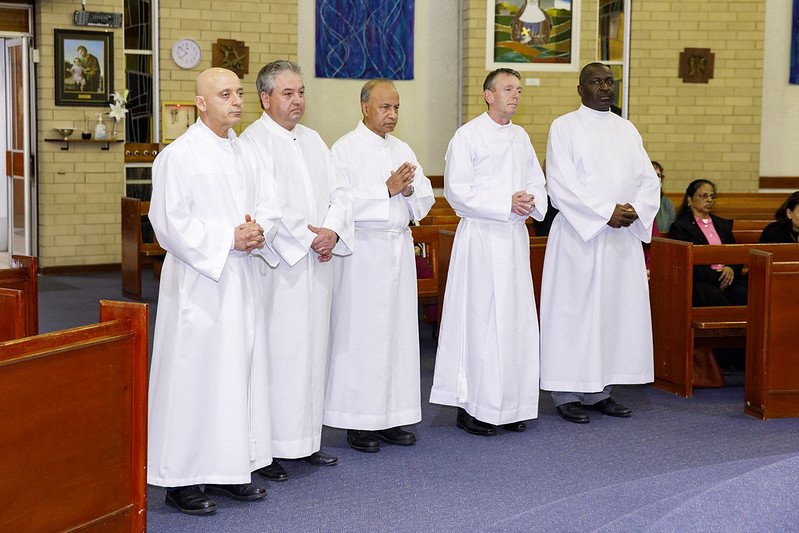