The Diocese of Parramatta lost one of its much-loved priests with the death of Fr Lou Breslan, aged 92, on Saturday 17 October. A priest for more than 67 years, Fr Lou celebrated his Diamond Jubilee of ordination in 2008 when he was Parish Priest of St Patrick’s Parish, Guildford. He retired from active ministry in 2009 and spent his remaining years in the quiet surrounds of Rosary Village at Yennora. Fr Lou’s brother, Fr Fergus Breslan, came from Ireland to concelebrate the Mass of Christian Burial in St Patrick’s Church on 23 October. The homily was given by Very Rev Fr John Hogan, who had known Fr Lou for more than 20 years. On arrival in Australia from the UK in 1975, Fr John had served as assistant priest with Fr Lou at Guildford Parish.

“Because of the warm and open friendship which emerged between us, I was in a privileged position to experience the realness of this man,” Fr John said. “A mildness of disposition, a courteous temperament and a heart of hospitality and charity do not quite do justice to the spirit and soul of the man, which manifested themselves in these outward signs of inward grace.” Fr John recalled how Fr Lou was well known for his blessings. “Nothing was outside the jurisdiction of his outstretched hand, always ready and eager to sketch a benediction. People loved him for that. They loved him for the way he selflessly made precious time available for their concerns.

“They loved him for the way in which he treated their concerns with as much preciousness as they did. Whether it be rosary beads, holy cards, holy water to take home, toothache and other maladies, or whatever other desperation people suffered, they knew they could always approach Fr Breslan with the assurance that a blessing would always be given and that Christ stood behind the priest.”

Fr John recalled how Fr Lou paid close attention to the “little things” of life and made these his world and the objects of his ministry and priesthood. “I believe Fr Breslan’s charism was for the sanctification of people’s lives in the midst of the overwhelming ordinary.”

Fr Lou was born in Maghery, County Armagh, Ireland, in 1923. He and three of his brothers became priests. Ordained at age 25, he completed his priestly studies at St Patrick’s Seminary in Carlow, with the intention of going on overseas mission. A meeting with Cardinal Gilroy convinced him that his future ministry lay in Australia, and on arriving in Sydney in March 1949, he was appointed curate at St Mary’s Cathedral. His later parish postings were to parishes at Thirroul, Lithgow and Manly before he enlisted as a chaplain in the Royal Australian Navy in 1955. His 20-year appointment included active service overseas. In 1975, he left the RAN and was appointed Parish Priest at Guildford. He also served as Chancellor in the Diocese of Parramatta. In retirement, Fr Lou’s daily devotions included celebrating morning Mass with fellow priests, saying the Rosary and the Stations of the Cross, and readings from the Daily Office.

Fr Lou is buried in the Priests’ Section of Rookwood Catholic Cemetery.

For more images of the event, please see below or visit: www.flickr.com/parracatholic/albums 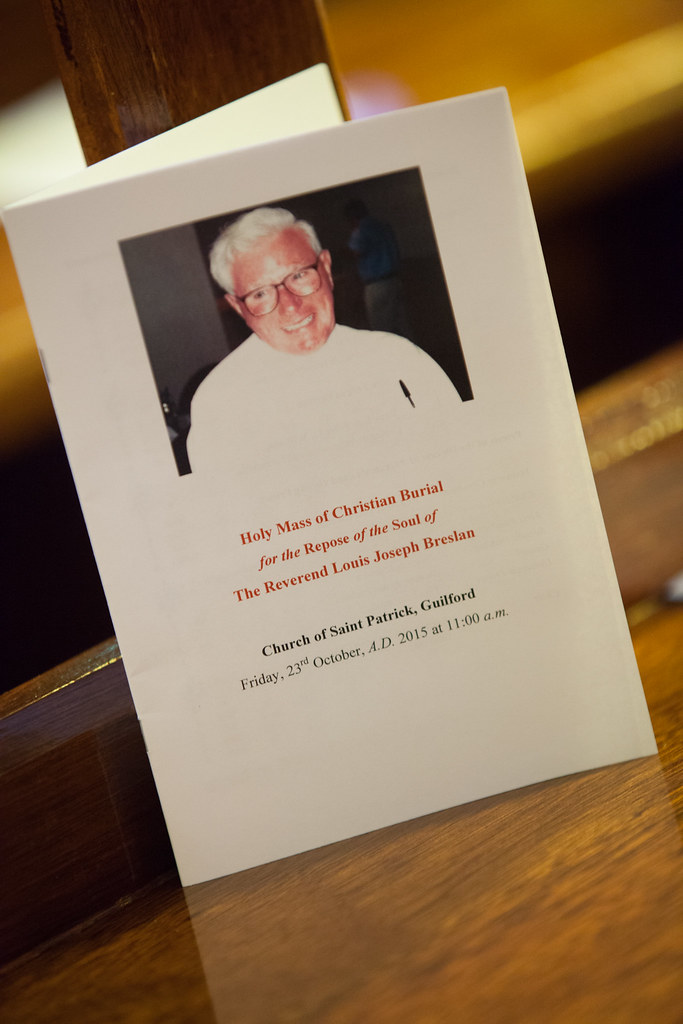