“Child of God first, priest second and musician third.” This is how Fr Rob Galea described himself to a sell-out audience at Riverside Theatre on Friday 8 April, as part of Catholic Youth Parramatta’s LIFTED Live! series.

It was no ordinary concert, but rather a journey of story and music, sharing the Gospel and giving hope and encouragement to the audience.

A thoroughly captivated audience shared in a rich tapestry of emotions, at times shedding tears and at other times, rejoicing. The message of redemption was one that Fr Rob weaved into his music throughout the evening.

His understanding of the complexities of youth culture is evidenced by his engagement with thousands of followers on social media, spreading the simple message of the love of Jesus.

For many, Fr Rob is an enigma. For the everyday Catholic, there is the paradox of a diocesan Catholic priest appearing on X Factor and selling tens of thousands of albums, but for the modern world, there is the irony of a talented and affable performer, content with his life as a priest, ministering in country Victoria.

Fr Rob was first thrust on to the world stage when, as a seminarian, he had moved from Malta to Australia and was asked to perform in front of hundreds of thousands of young people and TV audiences in the millions at World Youth Day 2008 in Sydney.

The request came from Fr Peter Williams, the Director of Liturgy for the 2008 World Youth Day, now Diocesan Administrator of the Diocese of Parramatta.

“At the time, I was quite introverted, quite scared, and unable to speak in public and yet I had this opportunity to sing with Guy Sebastian, Paulini and other great artists,” he said.

He credits Fr Peter’s belief in him to be able to perform in front of the half-million-strong crowd: “Fr Peter Williams believed in me when I was so scared, when I didn’t have the experience I have today.”

Despite Fr Rob’s experience on stage, he still gets nervous before a performance. The message of confronting your fears through adversity and the message of seeking simplicity in life’s complexities resonates with his younger audience.

“I always get scared. I am terrified. One of my mottos is: ‘Rob if you’re scared, so what? Do it scared!’ So I move forward in my fear and I trust God. Even if I mess up, I just want to bring who I am. My team and I bring ourselves as we are, mess and all, just to point to Jesus,” he said.

His team has some of the most accomplished musicians in the country, including Gary Pinto, singer-songwriter for Jessica Mauboy, vocal coach on the hit TV show X-Factor and lead singer of 90s band CDB.  Also in the band is Gary’s wife, Natasha Pinto, a former backup singer for Boyz II Men, and guitarist Isaac Moran, who plays for Guy Sebastian.

“Each person on the team loves Jesus. They love God and they love to serve others,” Fr Rob said.

Fr Rob and his band hope to bring a simple message to their performances: “We hope to encourage young people and encourage people who are not so young to continue on their walk with God.”

“And for those who don’t know God, we hope that they catch a glimpse of who and what God is, because if they get a glimpse of God, they will be changed forever because no one can enter into the presence of God and stay the same.” 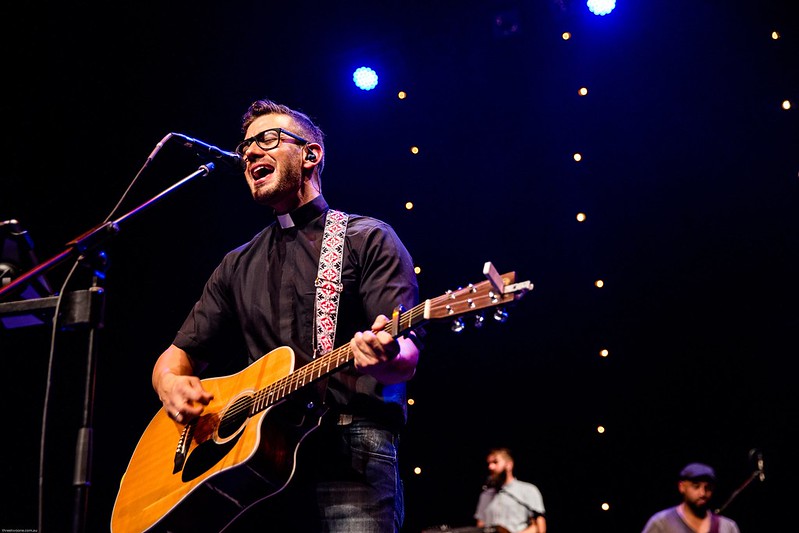