James Camden, Director of Catholic Youth Parramatta, described the huge turnout as an “incredible affirmation in the time, energy, finances and support that goes into making World Youth Day a priority for young people’s formative development in the Diocese of Parramatta.”

View images from the reunion below or click here. 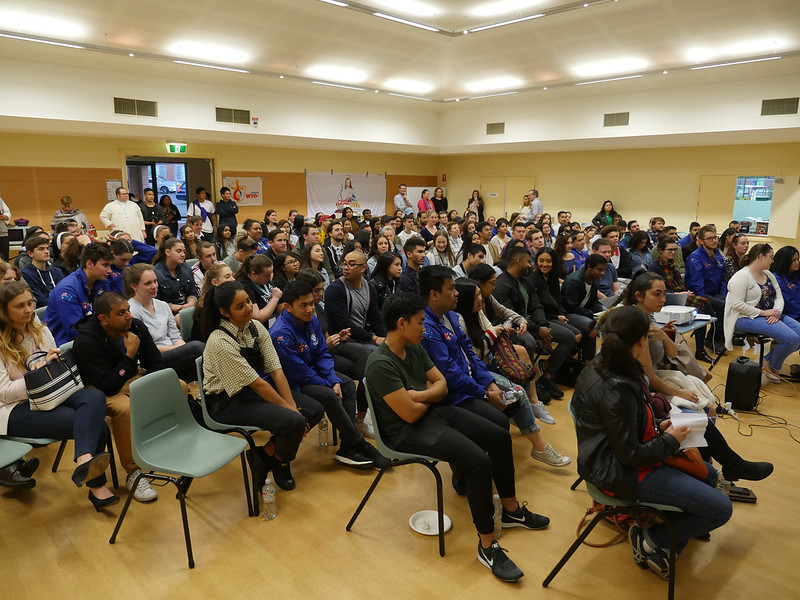 “More than 80% of our pilgrims wanted to be in each other’s company again. They seemed to relish the opportunity to share in their small groups and catch up on life’s twists and turns since our return,” James said.

The gathering also demonstrated the youth’s sense of belonging to the Church and strength of their commitment to Christ and His Church.

Pilgrims had the opportunity to share changes in their lives since WYD Krakow 2016. Many people stood to indicate a positive change in areas such as:

Shivon Jackson shared a powerful personal testimony about her experience on pilgrimage as a young teacher from Bethany Catholic Primary School, Glenmore Park. Shivon Jackson with her son and husband. Image: Diocese of Parramatta.

Shivon was devastated at her dear Grandmother’s death, days before departure for the pilgrimage. Her devout Catholic ‘Nan’ was a Mother figure and Shivon knew ‘Nan’ would want her to persevere with the pilgrimage, grow in her faith and see the Holy Father, Pope Francis.

Shivon carried the memory of her Grandmother with her and offered prayers and sacrifices for the soul of ‘Nan’ through the World Youth Day pilgrimage.

As if a sign of God’s blessing on her pilgrimage, Shivon discovered on return that she and her husband had conceived their first child. Now Shivon is on maternity leave with her son Cooper.

The pilgrims were deeply moved by Shivon’s speech and were able to reflect on their own blessings from World Youth Day Krakow 2016.

The pilgrims celebrated the first anniversary of their pilgrimage with good food, prayer, and song, before hearing about plans for World Youth Day Panama in January 2019.