New voices honour saint of slaves in word and deed

Members of the Legion of Mary present Bishop Vincent Long OFM Conv, Bishop of Parramatta, with a gift during the Mass for the Feast Day of St Josephine Bakhita at Mary, Queen of the Family Parish, Blacktown, Monday, 8 February 2021. Image: Diocese of Parramatta

Catholics engaged in the fight against modern slavery have joined members of Western Sydney’s South Sudanese community for a special Mass to honour the patron saint of slavery victims, St Josephine Bakhita.

The sound of African drums and cymbals filled the church along with the singing of the Sudanese Choir, while 150 attendees sat socially distanced.

The Bishop of Parramatta, Bishop Vincent Long OFM Conv, welcomed everyone to the Mass, describing St Josephine Bakhita as ‘the pride of the Sudanese people’ and someone who Pope John Paul II called ‘the shining advocate for genuine human emancipation’.

Bishop Long thanked all in attendance “for being a part of the anti-modern slavery and human trafficking network.”

“Wherever you are, whatever you do, we can together make a difference, and eradicate this evil from our midst, thus making the kingdom of God real and present for you,” said Bishop Long. Members of the South Sudanese choir during the Mass for the Feast Day of St Josephine Bakhita at Mary, Queen of the Family Parish, Blacktown, Monday, 8 February 2021. Image: Diocese of Parramatta

During the Mass, Moses Opondo, a Procurement Officer with Catholic Education Diocese of Parramatta, explained his work as a Modern Slavery Liaison Officer working with 37 other Catholic organisations in the Australian Catholic Anti-slavery Network (ACAN).

“My team and I facilitate the purchase of goods and services for our school system, in addition to looking after our supplier contracts. I am also a member of the Modern Slavery Working Group for the Diocese of Parramatta,” said Moses.

“What’s encouraging is that we can all help.”

“The Catholic Church is committed to the total eradication of Modern Slavery in Australia, and indeed globally. To this end, ACAN modern slavery risk management program is instrumental in this most important duty.

“Pope Francis himself reminds us not to underestimate the amount of work required to end Modern Slavery. Indeed, as Pope Francis puts it, the work will be long, requiring courage, patience and perseverance. Yet, it is a task upon which we must all embark. All of us!”

A visible example of the anti-slavery work of Catholic organisations was the purple t-shirts depicting St Josephine Bakhita worn by the Sudanese congregation supplied by the Australian Catholic University (ACU). Members of the South Sudanese community dance during the offertory procession during the Mass for the Feast Day of St Josephine Bakhita at Mary, Queen of the Family Parish, Blacktown, Monday, 8 February 2021. Image: Diocese of Parramatta

The T-shirts like all ACU clothing and uniforms are manufactured by Andrews Clothing and certified by Ethical Clothing Australia – a certification which provides an assurance that the garment workers are treated fairly and are not exploited.

ACU Vice Chancellor Professor Zlatko Skrbis attended the Mass and was proudly photographed with members of the Sudanese Catholic community in their ethical St Bakhita T-shirts.

“This policy is particularly important as uniforms have been identified as having a high risk of modern slavery as part of the ACAN modern slavery risk management program,” explained Alison Rahill of the Sydney Archdiocesan Anti-slavery Task Force.

Ms Rahill said it was exciting to hear new voices of people joining the fight against modern slavery.

“If you are a procurement officer, finance officer, facilities manager – or just an employee you can put your faith into action as part of your job and awaken a sense of purpose and goodwill in your workplace,” said Ms Rahill.

“That way the anti-slavery message of St Josephine Bakhita can extend far beyond the walls of the church and reach into contracts for good and services in all Catholic organisations across health and aged care, education, social services, finance and investment.

“Through this nationwide action of the Australian Catholic Anti-slavery Network, we can fulfil the aim of the Holy Father to eradicate modern slavery and human trafficking in our generation.” ACU is expanding its commitment to taking action against modern slavery with the naming of the new Blacktown campus after St Josephine Bakhita.

For the Sudanese and South Sudanese Catholic Community, the name of the ACU campus has generated enormous pride and a sense of recognition.

Deacon John Cinya from Parramatta Catholic Schools summed that up for those at the Mass.

“St Bakhita gives hope to those mistreated that someone will help them and that life will change,” he said.

“St Bakhita is an inspiration and her story awakens a sense of responsibility in all of us that those responsible for exploiting others must be held accountable.

“The new ACU campus will be a symbol of hope for the Sudanese people and for those who have been mistreated.”

St Bakhita’s Day is held annually on 8 February and honours the Patron Saint of the victims of slavery and human trafficking, and Patron Saint of Sudan and South Sudan. On this day, Catholics are encouraged to pray for all those affected by the crimes of modern slavery and human trafficking, and the people that volunteer and work to eradicate this crime.

Alison Rahill is the Executive Officer of the Anti-Slavery Taskforce in the Catholic Archdiocese of Sydney.

View images from the St Josephine Bakhita Mass here or below. 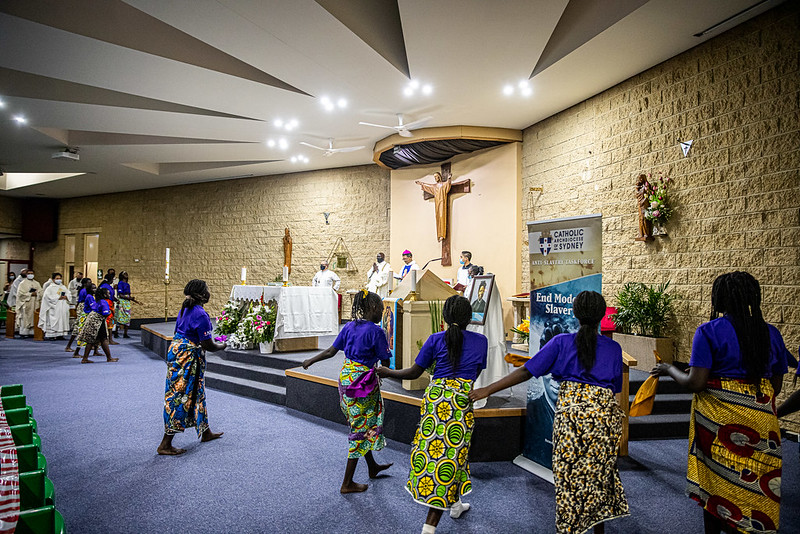