Fr Paul Marshall, Parish Priest of Our Lady Queen of Peace Parish, Greystanes, led 43 pilgrims on a 15-day pilgrimage around the Holy Land in October 2017.

The spectacular pilgrimage was documented on the parish’s popular Facebook page.

View images from the pilgrimage below. 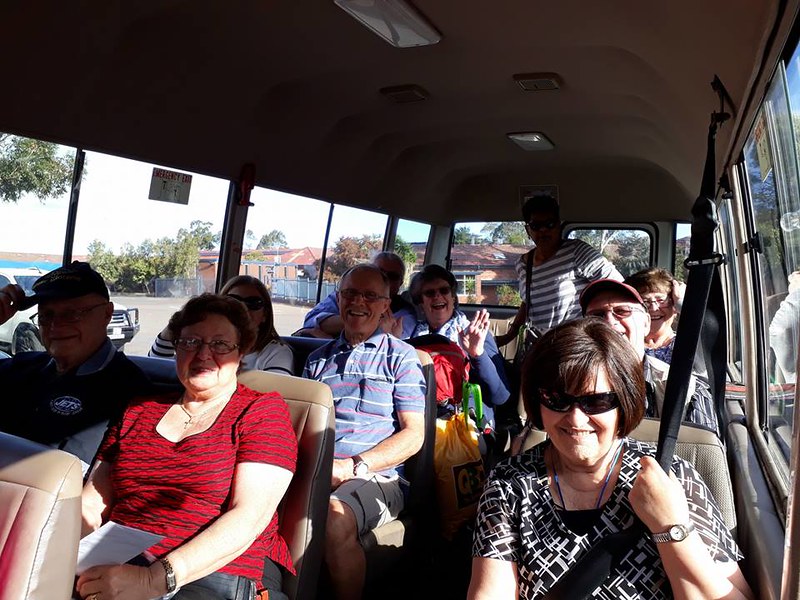 The biblical lands are steeped in history and the ancient ruins of Petra go back to the time of the Nabateans.

There is speculation that this area of Jordan was where St Paul spent his time in the desert after his conversion.

“Crossing the Jordan River took us back into the time of Joshua when he and the chosen people crossed into Israel,” Fr Paul said.

The pilgrims spent four nights in Jerusalem, three nights in Galilee, and two nights in Bethlehem and Petra, respectively.

The State of Jordan, which is 97% Muslim and 3% Christian, gave witness to the cooperation that exists between Christians and Muslims. Jordan hosts 600,000 refugees from Syria: it educates Syrian refugees with their children and feeds them and tries to find work for the refugee families. It is a mediator of peace between Israel and the Arab world.

The pilgrimage began with the celebration of Mass in Amman, Jordan. Pre-Christian and Old Testament worlds were explored at Mt Nebo, where Moses looked into the Promised Land, followed by two days in Petra.

Their first encounter with a place from Christ’s life was the holy Jordan River, sanctified by Our Lord’s baptism.

The next day the sun rose over a calm Sea of Galilee boat trip to begin the pilgrimage to Israel.

“We were blessed to spend a few days around the Sea of Galilee where Jesus did most of his ministry. Mass on the shores of the Sea of Galilee brought all of us close to the Easter Jesus. The theme we kept returning to on the pilgrimage was, ‘Who do you say I am?’ We visited Caesarea Philippi where Peter, when asked that question said, ‘You are the Messiah.’ (Mk 8.29),” Fr Paul said.

Fr Paul’s group then entered the stage of Christ’s public ministry, at the Mount of Beatitudes, the Capernaum Synagogue and the magnificent Franciscan church built over the first-century ruins of St Peter’s mother-in-law’s house in Capernaum.

More places where Jesus worked miracles followed at Cana and then Mt Tabor, the site of Our Lord’s Transfiguration.

On the seventh day of the pilgrimage, the party charted south for the Royal City of David, Bethlehem.

There was room at the inn, St Gabriel’s Hotel, where they stayed two prayerful nights while visiting the Church of the Nativity, the Shepherd’s Fields, Bethlehem University and other sights.

“Bethlehem University is the only Catholic University in the Holy Land, and is situated in the West Bank. It is run by De La Salle brothers, with Br Peter Bray, from New Zealand, the current Vice-Chancellor. Br Denis, an Australian, is also on staff.

“Muslim and Catholic students attend this university and they more than coexist. They actually have joy in their faces studying together in both the unity and diversity of beliefs! 70% of their students are Muslim and 30% Catholic. The Vatican supports scholarships for a lot of the students, many of whom come from impoverished backgrounds. The wall that divides Israel and the West Bank looms large over Bethlehem and is heavily graffitied,” Fr Paul said.

The next day began east of the Old City of Jerusalem, where they first visited the site of the Ascension, a moment of joy before walking downhill to the Garden of Gethsemane on the Palm Sunday Road to the city.

The group made their entrance to the Old City through St Stephen’s Gate, walking the Via Dolorosa to Mass in the Church of the Holy Sepulchre, the most sacred place on earth.

A busy afternoon followed with visits to the Wailing Wall, the Dome of the Rock, Tomb of David, the Upper Room and the Church of St Peter in Gallicantu, scene of St Peter’s Denial.

One leisure day followed this period of intense prayer and long distances.

The pilgrimage came full circle with final prayers at the River Jordan, before departing for home from Amman Airport.

“Mary figured prominently through all the sites in the Holy Land, particularly the Basilica of the Annunciation in Nazareth. Our parish of Our Lady Queen of Peace, Greystanes has a 50-year-old statue of Our Lady of Victories which we remember each year through the annual festa,” Fr Paul said.

Our Lady Queen of Victories was instrumental in securing peace for Malta in 1565 and for our world on 15th August 1945. We pay tribute to the rich Catholic heritage from the Maltese/Gozitan community, which is our inheritance at Our Lady Queen of Peace in Greystanes, Fr Paul explains.

Fr Paul further outlined that the harmony between Muslim and Catholic students at Bethlehem University today is a sign of hope for the Middle East and the world. Yet the history has not always been so good with Malta bearing the brunt of battles between Muslim and Christian troops over the centuries. After Saladin invaded the Kingdom of Jerusalem in 1187 and Acre fell to the Muslim armies in 1291, the Knights were forced from the Holy Land and eventually settled in Malta.

Two hundred years later, when the Ottoman Fleet then tried to invade Malta, the Knights and local Maltese heroically held them off.

Afterwards, Grand Master Jean de Valette built the Church of Our Lady of Victories in gratitude. A likeness of this statue is processed at the annual Our Lady Queen of Peace Parish Festa.

“Thanks go to all the Maltese and Gozitans whose history spans the ages who joined us on the pilgrimage to Israel and Jordan. Our pilgrimage group was also blessed with people from Indian, Sri Lankan, Australian and Arabic backgrounds. Some of us also had the added pleasure of having time in Malta and Gozo after the Holy Land pilgrimage,” Fr Paul said.

“As we visited all the holy places from Galilee to Bethlehem to the cobblestone streets of Jerusalem, our celebration of the Eucharist, with our own pilgrims singing and chanting hymns, brought us all together in faith and life. Constant meditation on the Scriptures at the place of miracles brought the Biblical texts alive. I am grateful for this amazing pilgrimage experience,” Fr Paul said.