Seminarians begin their mission for 2018

Members of Holy Spirit Seminary for 2018. Photo: Diocese of Parramatta.

The Seminary of the Holy Spirit forms young men intellectually, spiritually, morally, and pastorally in preparation for Ordination to the Sacred Priesthood.

For the two new seminarians of 2018 – Matt Bretania and Andrew Spiteri – the day marked the beginning of a new path in life and perhaps the most important path they will follow for the rest of their lives.

A formal procession into the Cathedral began with the Cathedral Schola, followed by students at Holy Spirit Seminary, the clergy of St Patrick’s Cathedral and Most Rev Vincent Long OFM Conv, Bishop of Parramatta.

The Cathedral Schola then sat on opposite pews, in the style of Choir Stalls. 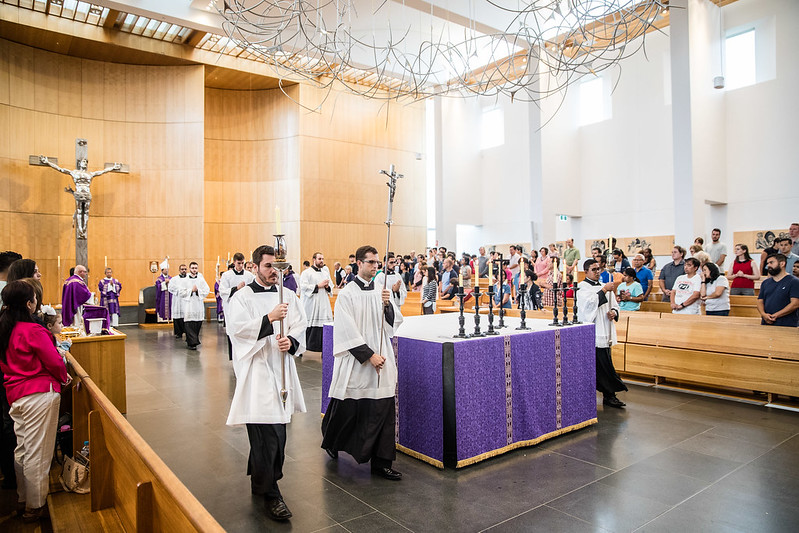 Family, friends and well-wishers packed the pews of St Patrick’s Cathedral, with an approximate attendance of 380 people.

The atmosphere was a mixture of excitement and sadness as they farewelled the seminarians for another semester.

Deacon Willy proclaimed the Gospel and Bishop Vincent preached the homily, reminding the congregation of the importance of renewal in the Catholic Church.

“We can go forward on a new exodus, knowing Christ accompanies us as he did on the road to Emmaus,” Bishop Vincent said.

“We are challenged to embrace the unknown pathways.”

He especially praised the Diocesan Seminary and called on the faithful to spiritually support its work.

“I urge you to pray for them to be formed in the image of Christ the humble servant,” he said.

At the Apostle’s Creed, the seminarians gracefully and clearly practiced the liturgical norm of a reverent bow during the Incarnation.

After Mass, the seminary year photograph was taken on the steps of the Cathedral.

Canadian Matt Bretania, a familiar face as singer/guitarist in the LIFTED Live band, shared his excitement at joining the Seminary of the Holy Spirit. Matt’s auntie Ofelia Hooker was an enthusiastic presence at the launch. Matt’s only relative in Australia had to be a conduit of the experience for the Bretania tribe back home in Canada.

“I’m so overwhelmed,” she said, while snapping smartphone photographs of her nephew.

Andrew Spiteri said he is excited for the opportunity to discern his vocation to the priesthood at Holy Spirit Seminary.