Members of the legal profession are seen during the Red Mass at St Patrick's Cathedral, Parramatta, Thursday, 4 February 2021. Image: Mary Brazell/Diocese of Parramatta

As society debates the importance of ‘the facts’, those who create laws and those who uphold them reflected on Christian values of truth and justice in a centuries-old Catholic legal tradition at St Patrick’s Cathedral, Parramatta.

Together, the politicians and members of the legal fraternity affirmed their commitment to justice to coincide with the start of the judicial year. Ms McKay told Catholic Outlook that she consults with and values the advice of leaders of faith communities. “My Christian values guide me in my life inside and outside of politics,” she said. “Values of love, respect, hope and justice are fundamental and I think in many ways they not only reflect the values of our faith but of our broader community.”

Mr McDermott also considers the Catholics of his electorate of Prospect. “As a Catholic, I always take the considerations of my community in my actions in the NSW Parliament,” he said.

In his opening remarks at the Mass, Bishop Vincent said, “It is appropriate, always, to seek God’s blessing on those entrusted with the administration of justice.

“We pray for you and for all who have dedicated themselves to the promotion of the common good of society and the protection of human dignity.” Members of the legal profession are seen during the Red Mass at St Patrick’s Cathedral, Parramatta, Thursday, 4 February 2021. Image: Mary Brazell/Diocese of Parramatta

Bishop Vincent called on those present to remember the patron saint of statesmen and politicians, St Thomas More, whose statue stands in the grounds of NSW Parliament House, and who was condemned to death for standing up for what was right.

Ms McKay agreed that St Thomas More’s defence of the truth offers a lesson to those under his patronage.

“I think he is a very fitting patron saint for politicians and lawyers alike. He was a man of the greatest integrity and a man whose faith came first,” she said.

During his homily, Fr Peter Williams, Vicar General & Moderator of the Curia and Dean of the Cathedral, explained that Jesus is our standard of righteousness and that those in the legal profession are called to “do justice” as outlined in the New Testament, guided and informed by the Holy Spirit.

In his words of thanks, President of the St Thomas More Society, Michael McAuley, highlighted the early faith traditions and how they influence justice today.

“Tonight, when we celebrate the Red Mass, we are celebrating not only these things, but also the work of ordinary lawyers who are doing their work professionally, with their door open, not only to the rich and powerful and famous but also to those who are not rich, not powerful and not famous.” Members of the legal profession are seen during the Red Mass at St Patrick’s Cathedral, Parramatta, Thursday, 4 February 2021. Image: Mary Brazell/Diocese of Parramatta

Steve McAuley, Principal Solicitor at McAuley Hawach Lawyers and Committee Member of the Parramatta & District Regional Law Society, said, “For lawyers, our response in faith is to be the best lawyer we can be, to offer our work to God, and help those around us. We are all weak, and need God’s help, which he offers us continually through his Church.”

The Red Mass is so-called after the red vestments worn by the celebrants to signify the Holy Spirit.

The 2021 Red Mass, held on Thursday 4th February, was organised by the Diocese of Parramatta, St Patrick’s Cathedral Parish, the St Thomas More Society and the Parramatta and District Regional Law Society.

To watch the celebration of the Red Mass at St Patrick’s Cathedral, click here.

View images from the Parramatta Red Mass  here or below. 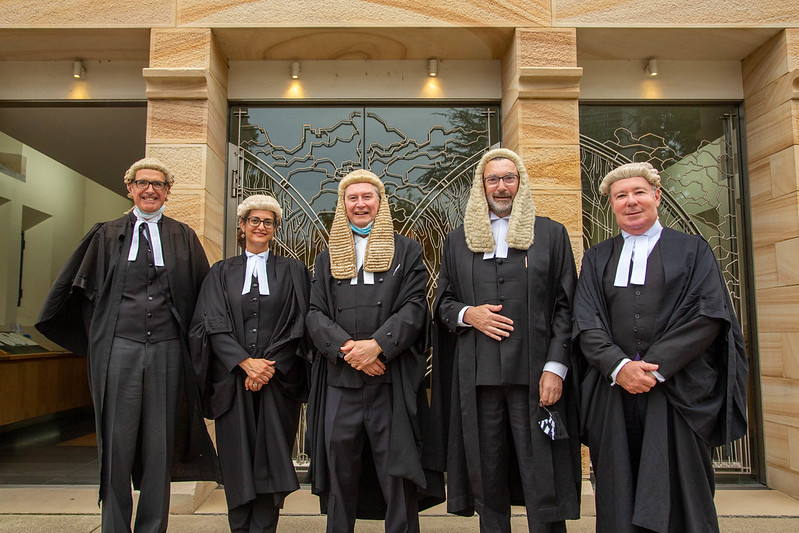