“A dedicated priest and a family man!”: Requiem Mass for Fr Brian Rooney

Bishop Vincent paid tribute to the leadership of Fr Brian and said his loss would be felt by his former parishioners at St Clair, Westmead and North Parramatta parishes.

“Today we come to farewell a fine priest and a wonderful brother, Fr Brian Rooney, who never lost the essential joy of the Gospel” Bishop Vincent said.

Commenting on Facebook, Marg Roon remembered Fr Brian as “A dedicated priest and a family man!”.

“Fr Rooney was a big part of our families story” Natalie Vella, a former parishioner of Fr Brian from Holy Spirit parish St Clair, also said via the Diocese of Parramatta Facebook page. 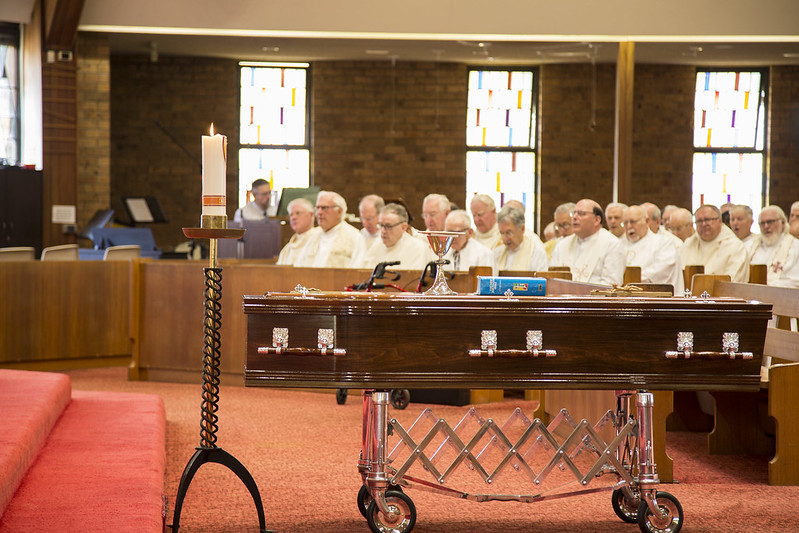 Bishop Bede Heather delivered the homily, warmly remembering Fr Brian as a servant of the people who came from “a strongly Catholic family and a very talented family”.

“We gather today to thank God for his life. People naturally warmed to him” Bishop Bede said, adding that Fr Brian “aspired to serve, rather than to rule”.

The Mass was live streamed on the Diocese of Parramatta’s Facebook page and can be viewed here.

Fr Brian was born in Ballina, a town that is in the Northern Rivers region of NSW, near the Queensland border. One of six children, Fr Brian was the son of Charles Joseph Rooney and Margaret Mary (formerly Russell).

He was educated in Earlwood NSW after his family moved to Sydney. His early primary school education was with the Sisters of Mercy and he then went on to complete primary and secondary school with the Christian Brothers at Lewisham.

Leaving school in 1945, Fr Brian began work in the clerical section of the Public Works Department of NSW.

A vocation to the priesthood was calling however and after 10 years of public service, he entered St Columba’s junior seminary at Springwood. From there, he continued his studies at St Patrick’s College, Manly.

Fr Brian was ordained to the priesthood in St Mary’s Cathedral, Sydney on 20 July 1963.

May you all be kept safe and blameless, spirit, soul and body, for the coming of our Lord Jesus Christ. 1 Thess 5:23.

These words were heard by Brian Matthew Rooney when he attended Mass in this church on 17th December last. It was the Third Sunday of the Advent liturgy, and the Christian community was preparing for the Lord’s coming. Unknown to Brian his advent was at hand. He died quietly at home in his sleep on the following night. We gather today to thank God for his life and to commend him to the Lord’s care.

Brian was the third of the six children of Charles and Margaret Rooney, five boys and one girl. They were a strongly Catholic and highly gifted family. Brian was educated by the Sisters of Mercy at Earlwood, then by the Christian Brothers at Lewisham. After his Leaving Certificate he joined the State Public Service, where he worked for ten years before pursuing his priestly vocation.

I first met Brian when I was teaching at St Columba’s, Springwood. By the standards of those days he was a mature-age student. He and a few others brought a note of maturity to the generally youthful tone of the College. He was a devout, conscientious and compliant student. Less interested in sport than the general run, he gave time to the Literary and Debating Society and promoted theatre among the students. He had worked with the Genesians before coming to St Columba’s. I believe Brian never troubled the authorities over the course of his training, and they never troubled him. He knew what he was about. He was ordained for the Archdiocese of Sydney at St Mary’s Cathedral on 20th July 1963.

The Spirit of the Lord has been given to me

For the Lord has anointed me.

Age carried no privilege in the Church in those days, and Brian was assigned as a junior priest to a series of short appointments in Sydney parishes. I believe they are listed elsewhere. Notable among his early ministries was a two-year appointment at Tom Price in the Diocese of Geraldton, W.A., a centre of the mining boom. It was the beginning of Brian’s great attachment to the West. His elder brother John practised medicine in Perth, and his younger brother Robert had entered the Benedictine Abbey of New Norcia in 1957. Until recent years Brian was a regular visitor to the West. Upon return to Sydney Brian resumed his nomadic pilgrimage around parishes as Assistant and Administrator until his appointment as Pastor of the new parish of St Clair in 1981. It was his opportunity, and over 13 years was to become his great achievement.

In 1981 St Clair was mainly open fields intersected by a complex network of roads. From place to place booths were to be seen where land sales were completed. Some houses were under construction and schools had been built to accommodate the expected arrival of young families. Fr James Page had arranged for the Archdiocese to purchase a substantial field at the corner of Moore St and Todd Row. Cardinal Freeman’s idea in establishing the parish so early was that the Church be there to welcome the newcomers rather than come later and have to look for them. Brian took up residence in a simple cottage and all were invited to daily Mass. The first parish Mass was at St Clair Primary School in November 1981. I recall being present as Regional Bishop at the time.

Brian and his advisers wisely avoided the obvious and chose to name it the Parish of the Holy Spirit. It was the breath of the moment in those years after Vatican 2, and Brian was the right man for that moment. He was open to the stranger, from wherever he or she came, and recognised the struggle of settlers to put a roof over their heads and to find a job to meet the mortgage. In due course, and with the help of better established parishes, Holy Spirit had its church and school. It was fertile country: there would be six, sometimes ten baptisms, each Sunday.

In all this Brian was pastorally helped by the dynamic Jesuit, Father Paul Coleman, who also died in 2017, and by the Sisters of Mercy, particularly Sister Joan Keogh as Pastoral Associate. It may be a record meriting a Guinness entry that Brian had a Jesuit as Assistant Priest and a Sister of Mercy as Pastoral Associate. Brian said, Welcome!

Thanks in part to these foundations Holy Spirit Parish today is a flourishing multi-cultural community, now served by the Augustinian Fathers.

After St Clair Brian had a change of pace as Director of the House of Prayer at Mount Kurrajong. Then there were some short pastoral assignments, concluding with five years as Pastor of St Monica’s, North Parramatta. After 2008 Brian continued to do relief ministry for as long as he was able. He was always flexible, ready to oblige, unfailingly loyal – a bishop’s dream, you could say.

Brian’s brother, Abbot Emeritus Bernard Rooney OSB, is unfortunately unable to be with us today. He has provided the following comment on Brian.

Brian was always a thoroughly innocent and good man. He was all that a brother could be

to his parents, to his sister Margot and to his older brother John, a well qualified

physician, all of whom are since deceased. He was particularly kind to his younger

siblings, Maurice, myself and Don, all of whom are still in the land of the living.

Generous to a fault, Brian was always free with his money and his possessions,

hardly ever wanting to keep anything for himself.

Many of us will recognise the truth of this family snapshot. Brian was gentle of character, never provoked to raise his voice. People naturally warmed to him, even in the past year after the Mass at St Michael’s. He was designed to make friends. Brian aspired to serve rather than to rule, and accepted a leadership role only when it could be shared with others. He was with others rather than over them. He had a whimsical manner which sometimes expressed itself in witty and sharp epigrams.

Brian was also a reader and a thinker. A recent observer told me that his library contained a carefully annotated version of the Documents of Vatican 2, a recent edition of the New Revised Standard Version of the Bible, and several commentaries on the contemporary Australian Church. He listened regularly to the news and followed current affairs both here and abroad.

Farewell dear Brian, and thank you for all you gave to your family, your friends and the Church. I conclude with a final comment from Abbot Bernard.

Now that he has gone to God, after a lifetime of service as a diocesan priest, it would

have all been promised by the Lord and that Brian himself has so richly deserved.

Nevertheless, we will remember him always in our prayers, together with our parents,

elder sister Margot and our eldest brother John. May they rest in peace!