Bishop Antoine Tarabay, Bishop of the Maronite Eparchy (sixth from left) and Dr Ibrahim Abu Mohammad, the Grand Mufti of Australia (fifth from right) joined Bishop Vincent (third from right) and Fr Patrick McInerney (fourth from right) and other faith leaders and Members of Parliament at the Interfaith Iftar Dinner on 20 April 2022. Image: Diocese of Parramatta.

Following Pope Francis’ message to foster relationships and understanding between religious groups, Bishop Vincent Long OFM Conv, Bishop of Parramatta, and the Columban Centre for Christian-Muslim Relations co-hosted an Interfaith Iftar Dinner which brought together Christians, Muslims, Jews, Buddhists, Sikhs, Baha’is, and others to listen to the common values behind all faiths that benefit humanity.

The interfaith was event held on Wednesday 20 April in Parramatta during Ramadan, a time of fasting, alms-giving, prayer and reflection for the Muslim community.

Bishop Vincent, in welcoming guests, explained why interfaith events were so vital, particularly in Western Sydney.

“Western Sydney is the epicentre of an ethnically diverse, multicultural and multifaith Australia,” he said.

“Ecumenical and interfaith partnership is vital to our mission as we seek to be the Church that walks with fellow pilgrims on the journey towards the fulness of life and love. We stand in celebration of our common humanity and dedication to peace and justice for all.”

Dr Ibrahim Abu Mohammad, the Grand Mufti of Australia, addressed the gathering as keynote speaker. His message focused on the benefit that religion has brought to humanity.

“Religion, as we learned from its pure sources, was and still is an approach to justice, protection for people, architecture for the universe, and an enemy of poverty, disease, hunger, and everything that humiliates human dignity,” he said.

His message encouraged all religious leaders to continue to promote religious beliefs amongst humanity, highlighting messages of love and peace that allow all people to open their minds and hearts to building up society, rather than creating conflicts and wars.

“It is our duty as leaders of religions to ignite the light of faith in the depths of the human soul so that man returns to his instinct that promotes faith and what it contains of love, so that the purity of the soul, the radiance of the heart, and the genius of the mind return to him, and turn towards societal reconstruction instead of conflicts and wars,” he said.

The dinner was also the first event to be attended by the inaugural members of the Interfaith Commission of the Diocese of Parramatta, who were appointed by Bishop Vincent and met for the first time in early April 2022. The role of the Commission is to facilitate interfaith relations in parishes, schools and organisations of the Diocese of Parramatta. Member of the Commission, Debbie Grigson, a parishioner of St Patrick’s Cathedral, and Assistant Principal of Catherine McAuley Westmead, has a particular interest in interfaith, having been a member of the committee that reviewed the Studies of Religion syllabus for the Board of Studies.

She explained that understanding the meaning of traditions and rituals leads to a better understanding of the core beliefs of different religions. She is also a strong supporter of events that bring people of different faiths together in a social setting.

“When you meet socially people are more relaxed and talk more openly about things that as human beings we have in common,” she said.

Fr Patrick McInerney, Director of the Columban Centre for Christian-Muslim Relations, recognised the importance of this time of year for both Muslims and Christians when Lent and Ramadan overlapped.

“God’s mercy is abundantly available to all, freely given, freely poured out.  We Christians and Muslims, therefore, must show mercy to one another, and to all others, for we are all sisters and brothers,” he said in his address to the guests.

“That is the common message of Ramadan and Easter.” 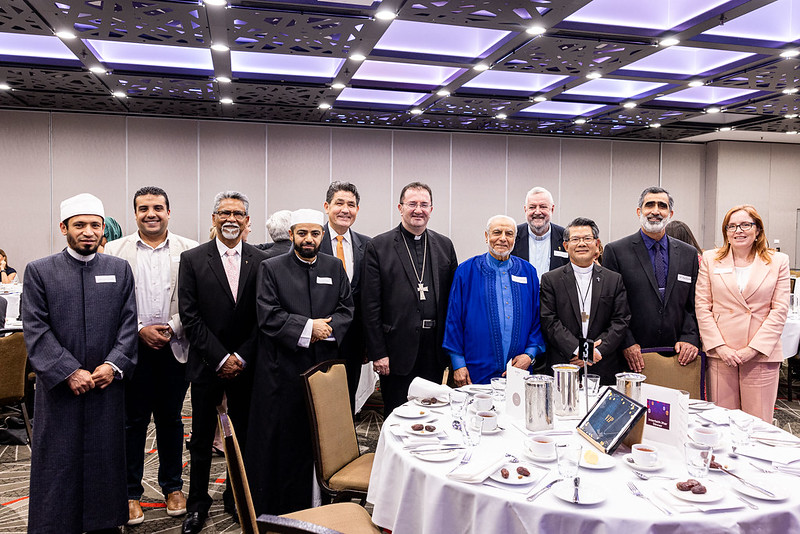