The Resurrection of Jesus gives us the opportunity for everlasting life.

This was the message shared by Parish Priest Fr Wim Hoekstra as he celebrated the Easter Vigil at St Michael’s Church, Baulkham Hills, on Saturday 16 April.

As the sun set, Mass began outside St Michael’s with the Service of Light, where the new Paschal candle was lit from a blessed fire and then processed into the church. During his homily, Fr Wim explained that we gather at the Easter Vigil to celebrate God’s love for us and rejoice with the rest of the Church.

“Today, we are caught up in the story that God has planned from the beginning of time, and we are all part of that story because we are all here, because God has created us to be good people, and as we heard on Thursday, to be people of service and to be people of obedience to God’s will. “Yesterday afternoon [Friday], in Jesus’ death and Resurrection, we are called to give of ourselves for others, as Jesus has given Himself to us, and the reward for us will be to be with God, to be with Christ.

“We remain faithful to that life of self-giving and to this life of service. This is what God is calling us to – not to laud it over others, but to live a life of service, of generosity, of kindness, of sharing with other people.”

The Parish of Baulkham Hills was among a dozen parishes in the Diocese of Parramatta which welcomed new Catholics into their faith communities at the Easter Vigil. At St Michael’s, four adults received the Sacraments of Initiation, four children were baptised and one woman was received in full communion with the Catholic Church. Parish Priest Fr Wim Hoekstra (left) with the newly baptised and confirmed members of the parish during the Easter Vigil at St Michael’s Church, Baulkham Hills. Image: Diocese of Parramatta

One of the new neophytes, Heyan (Polly) Wang, told Catholic Outlook that she is very pleased to have joined Christ’s community at the Easter Vigil. Heyan (Polly) Wang (centre) is confirmed after being baptised during the Easter Vigil at St Michael’s Church, Baulkham Hills. Image: Diocese of Parramatta

“I am blessed from God and I believe that Christ is the son of God and He has blessed my life,” she said.

“I’m very happy and proud to have been baptised today.”

Sharon Sordo told Catholic Outlook her heart is full of love after being received into full communion with the Church. Sharon Sordo, who was received into full communion with the Church, is seen with her husband and sponsor John Sordo during the Easter Vigil at St Michael’s Church, Baulkham Hills. Image: Diocese of Parramatta

“I’ve wanted to take the Eucharist with my children and husband for at least two years.

“I was surprised at how much support there was from the whole community and parish. When we were all presented to the community on the first Sunday of Lent, I didn’t realise how important it was to people in the community, and I was really touched by that.

“I feel very blessed and very thankful. This Easter’s very special [to me].

“I feel probably closer to Jesus and God than I’ve ever been in my life.”

View images from the Easter Vigil celebrations at St Michael’s Church, Parish of Baulkham Hills here or below. 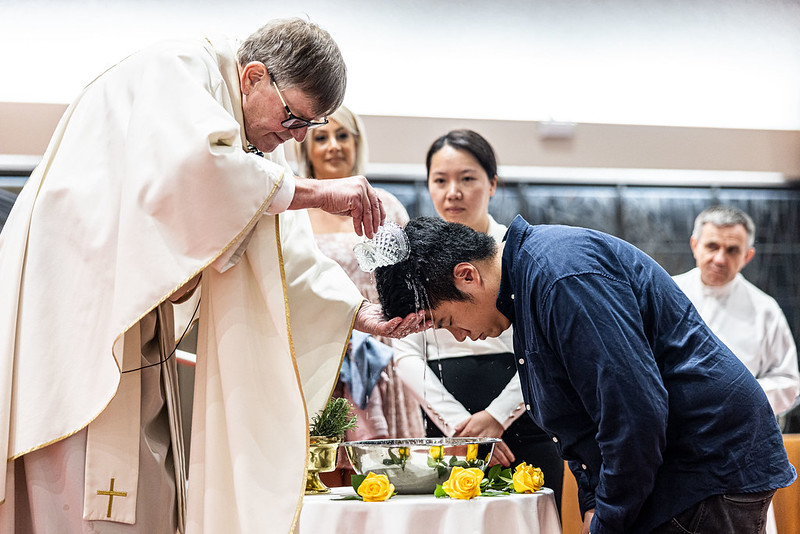